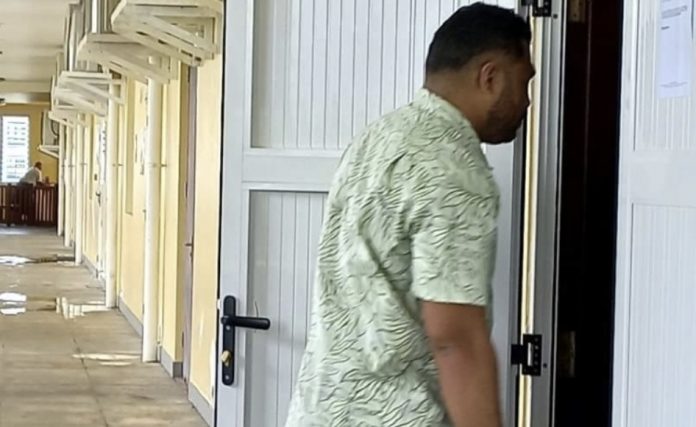 The former customs officer charged with the importation of methamphetamine gave evidence this afternoon to give his side of the story in the events that led to his arrest in February, when a consignment containing drugs was identified by K-9 unit dogs and border control officers.

Taking the stand Pueleo Peseta maintained his position that he had no knowledge of the origins of a consignment that arrived into Samoa in February 2021 from the United States.

Giving evidence Peseta told the Court that he had received a phone call from Edward of Transam shipping agents to come in and pay the required fees to release a package (faamomoli) addressed to him.

He described visiting Transam that day, paying $94 tala to Sio of Transam. He testified that he did not take any notice of the sender’s name because he was expecting a car engine from New Zealand and thought this was it.

The Court heard that the exporter’s name was Siaosi Mataio, however, the defendant testified that he does not know who that person is.

“I have no relatives or friends by that name, and I don’t know who that is,” he said.

The receipt from the Transam payment was made out to “Leo Paseta” and not “Pueleo Peseta”. The defendant confirmed that it was his phone number and his village, Vailele, written on the receipt. Asked by his defense counsel Lucy Sio-Ofoia why he did not check the name on his receipt properly, he responded he was rushed that day, went in and paid the fee and walked away without looking.

In his defense, Pueleo Peseta told the Court he was expecting a new engine for his car during that time. The engine was to be sent from a friend living in New Zealand by the name of AJ Salevea. According to Peseta, when he went to pay for the Transam fees, he thought that it was for the consignment of his new engine from New Zealand.

“When I called AJ to thank him for the engine, he told me that the engine was still at the wharf in New Zealand and hadn’t been sent,” said Peseta. “I told him I had already paid the fees with Transam, for the engine, but he said, no, he hadn’t sent it.”

According to Peseta, that was when he then took a good look at the receipt, and saw that it was not his name, but that of Leo Paseta from Vailele on the receipt.

Edward from Transam told the Court the defendant did not mention a car engine, but did tell him that he was expecting a package (faamomoli).

Liaina Saena of the Customs Department told the Court that Peseta told him he was expecting a package (faamomoli) and made no mention of a car engine.

Esera of the Customs Department told the Court that Pueleo Peseta had asked him where the K-9 unit dogs were working that week.

The defendant denied all these things and said he did not accept the claims put forward by prosecution’s witnesses.

The defendant told the Court that on Tuesday 2nd February 2021, he was asked to a meeting with the Ministry’s CEO and Management, when he arrived to work just after 8am that morning.

The defendant testified that the Assistant Chief Executive Officer of Ports Operations, Mr Alvin Onesemo, then questioned him infront of the management team about the consignment containing drugs.

“Alvin asked me if I knew the name on the consignment, and I replied, no. He then asked me why I had paid the Transam fees, and I did not respond, but asked instead to have a lawyer present.”

Peseta told the Court that at this point, the police were called in. When the police arrived they told him that they were going to open his box. He responded, “Why should you open that box, it is not my box”.