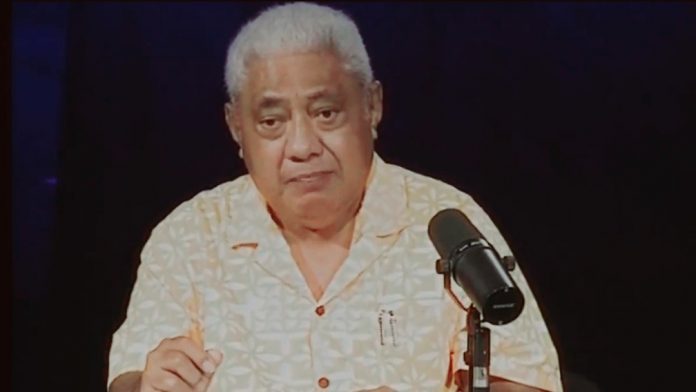 The Government Press Secretariat has issued a press release translating an interview by former Chief Justice Patu Tiavasue Falefatu Sapolu who puts forward his views on the current political stand-off.

The former CJ had registered to be a candidate for the Human Rights Protection Party at the 9th April general election however he later had to withdraw his nomination for health reasons after he was medivac’d to Auckland for treatment prior to elections.

Patu has publicly stated a call for fresh elections, saying there cannot be a majority until a political party reaches a number higher that 26. The former CJ goes on to interpret the decision of Samoa’s Court of Appeal and reinforces the HRPP stance that Parliament cannot convene until all six women have been decided.

Amidst the political stand-off where the public are receiving messages from two Prime Ministers, the former Chief Justice says only the Head of State can remove a Prime Minister and says the caretaker government have every right to be governing at this time.

The interview is published in verbatim below.

(NOTE; The following is the English Translation from the television interview by the Former and Retired Chief Justice Patu Tiava’asue Falefatu Sapolu with TV1 Samoa on June 12th 2021.

As the longest serving C.J. for 26 years until his retirement in 2019, Patu shares his views on the recent Court of Appeals decision recognizing the 10% minimum requirement or 6 Women MP’s to sit in Parliament based on the results of the 2021 General Elections on April 9th 2021. The English transcript is disseminated for the information of the General Public.)

PATU greets the Host – Thank you for the invitation and I am humbled to be invited especially during this time.

TSA: The recent Court of Appeal case decided that 6 women should represent the 10% minimum under the Constitution and that we should await the conclusions of the petition cases and bi elections before deciding the number of additional women members. Please kindly clarify to us, what does this mean?

PTFS: There are 3 important issues and decisions before us
Firstly, the Court of Appeal decision of 2nd June 2021 has clarified that the 10% minimum of 51 elected members of Parliament should be 6 and not 5, as the Supreme Court had earlier decided. In my view of the Court of Appeal decision if, after a general election, 6 women or more are elected, then the 10% provision will have been satisfied within 51 elected members and in accordance with article 44. of the Constitution.
However, if after a General Election, 6 women are not elected by general election, then additional women MPs will have to be chosen to attain the number of 6, being 10% of 51, as determined by the Court.

Secondly, Aliimalemanu Alofa Tu’uau’s seat was declared void by the Court of Appeal so this reduced the number of HRPP seats from 26 to 25 and thus giving 26 seats to FAST and 25 to HRPP. Because the parties had held an equal number of seats prior to this, the question of holding a snap election arose, due to Aliimalemanu’s seat being voided.

Thirdly, the Court of Appeal decided that we will only know whether Ali’imalemanu Alofa could still become the 6th additional woman to the current 5 successful candidates elected in April this year and the fact is, that this can only be determined after the petitions and bi elections have been dealt with.
It is only at that point in time that we can know whether an additional woman member or members is required or not. It is only when the current petitions are completed and bi elections have been held, that we can be certain of what number of additional women is required to complete the 6, required by the law.

There are 2 types of Members of Parliament in Art. 44 of the Constitution; there are 51 elected members, 1 from each of the 51 districts of the country, together with women members referred to as “additional members” and the number of any additional members depends upon whether the 10% requirement is achieved through general election, or by appointment, to ensure that the number of women members number is never less than 10% of all elected members.
That part of the Court decision clearly states that to satisfy this provision (Art. 44) the number of women can be 6 upwards, as long as there is never less than 10% women members in Parliament. Secondly, the Appeal Court decision departed from the Supreme Court decision and effectively reduced the number of members from 26 to 25 for the HRPP and thirdly, we will only know and be clear about how many additional women members there will be, or whether there is a need for any further women members, after the hearing of petitions currently being heard and also the holding of bi elections.

Taulealeausumai and our country of Samoa, the difficulty facing us that this is to be the process we must now follow, to await the completion of bi elections for only then can we determine any additional women members.

So I put this question, what if, after the bi elections there are further petitions lodged to challenge those bi elections and we must go back to Court again?
What will be our position if that is the case? It could mean uncertainty and instability for Parliament and the decision making processes of our country and that is a troubling reflection on my part.

TSA: Thank you Patu, you have explained the Appeal Court decision in detail. So with the current situation that FAST has 26 members and HRPP 25, my question is: Can Parliament be convened now?”

PTFS: The answer is no…

TSA: Thank you Patu, if I understand correctly from your explanation, the interconnected matters have come about from the recent Court of Appeal decision. Judging from the decision in my personal opinion, the Court has tried to satisfy both the HRPP and FAST. That is my personal view about the Court of Appeal decision.
But maybe if we had just gone back to the polls as the Head of State had proclaimed, on the 21 May 2021, maybe everything would have been resolved by now, there wouldn’t be further conflict, there could have been a clear decision as to which Government would have come in, and you and I would not be having this discussion today.
What do you say?

PTFS: Some people have said to me : “Patu, if only the people were given another opportunity to decide, this situation would have been resolved by now and allow the country to decide whichever Government is to lead the country, because we do not understand all these laws.
So when I hear this wise advice from our traditional elders, it is comforting to hear and maybe they are correct, if we had taken that path that these matters would be concluded and resolved in an amicable way, having given the authority to the people to decide who should govern.
In that manner, the Court would not be the decision maker nor anyone else, but it would have been decided by the mandate of the people of Samoa to choose their elected representatives and give certainty as to who would lead the country for the next 5 years.

TSA: FAST has 26 members and HRPP 25 at this point in time and you have clearly outlined the conditions required for Parliament to convene. FAST are advocating that they should take over Government now and HRPP should leave the governing of the country now.
FAST also gave HRPP an ultimatum to leave 48 hours after negotiations fell through, however HRPP are adamant that for them to leave at this stage is unconstitutional. What is your opinion on this?

TSA: My other question, there are many statements by Hon. Laauli of FAST that public servants should act independently in the execution of their public duties, in particular the Ministry of Police, they should not act for either party but they should remain independent in their duties and in particular in upholding the law. What is your view on this particular situation?

PTFS: The ideal situation is that Public Servants should not be involved in party politics, so as not to affect decision making of Government.
We should also remember, that with party politics everyone takes an interest or has a view, even public servants and people outside of public service participate in General Elections, just as public servants do. They to have their rights and their needs, they too will decide to vote for a candidate from a particular party, it’s human nature to do so, but once they perform their duties as public servants, I believe they must act independently.
To give a brief example, if I am a doctor and a patient is brought to me for attendance, the doctor should not ask what party affiliation the patient is, before determining the treatment to provide the patient, that should never be the case. Rather, the patient should be attended to according to the Doctors’ duty as a doctor and according to one’s calling as a Public Servant of the Government.
It’s the same for a lawyer, if a Defendant seeks legal advice, the lawyer should never inquire as to whether the client’s political affiliation is FAST or HRPP, before determining whether to represent the Defendant or not.
I am referring specifically to the fact that the performance of the duties of public servants should be executed independently and impartially, just as TV1 should be accessible to any member of the public for broadcasting services, that is the mandate of your company.
TSA – Patu, at this time FAST is stating that they should be governing the country while HRPP is stating that it is unlawful to do so.
What if the Court should order, or FAST should give the Commissioner of Police a request that Tuila’epa and the HRPP should leave office?
PTFS: Pursuant to Article 33 of the Constitution only the Head of State can remove the Prime Minister and his Government.
It is the Head of State that appointed the Prime Minister and it is he, alone who removes the Prime Minister, it cannot be that the Head of State appoints the Prime Minister and a political party or the Court removes the Prime Minister.
The Court cannot interfere in politics, these matters are referred to the political judgment of the Head of State of our Government, to decide whether to terminate the service or “tautua” of a Prime Minister.
But the power and duty is inherent to the Head of State to exercise.
This is the first time that it has ever happened, that someone has performed the Constitutional duties and exercised the powers of the Head of State. I do hope that this will never re occur, a second time.

PTFS: That is correct Taulealeausumai, that is so.

TSA: Does that mean that for now, Government public servants should continue to obey the directions and instructions of the Caretaker Government led by Hon. Tuilaepa Sailele Malielegaoi and the HRPP?