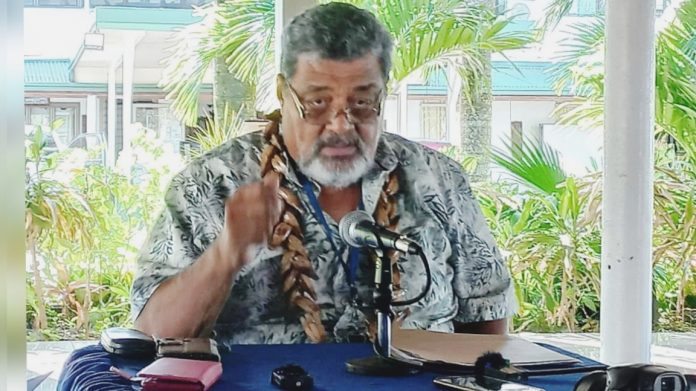 From the files of #FaaSamoa Former CEO of Samoa’s National Provident Fund, Papalii Panoa Tavita Moala has spoken out publicly about SNPF lands he says we’re “gifted” (foa’i) to a local church to be used as prizes for a fundraising raffle.

Papalii Panoa served as the Chief Executive of the SNPF between 1997 and 2007. During this time, Papalii alleges that former Prime Minister Hon Tuilaepa Dr Sailele Maliegaoi, requested lands to be gifted to his local church parish, to be used as a major prize for a church raffle at the time.

In response, Tuilaepa sent a public warning to Papalii Panoa Moala, to withdraw his allegations that are defamatory to both himself and the Siusega Catholic parish.

“If he does not apologise, then our lawyers will file a law suit.”

However the former SNPF CEO is not backing down.

In a press conference with local media this week, Papalii Panoa Moala said he will not apologise because everything he is saying is true. He says he has evidence and can prove what he has alleged.

“I would never state anything that I cannot prove,” he said. “I am prepared to show the evidence in Court.”

“I do regret naming the church, but it must be clear that I only mentioned the name of the church because I was highlighting the wrongdoings of Tuilaepa,” said Papalii Panoa Moala.

Asked by local media why he did not reveal this earlier, as it has been 15 years since he left the SNPF, Papalii Panoa Moala said he never wanted to accuse anyone or reveal this.

“I could no longer take Tuilaepa’s public accusations towards me, so I decided to reveal this (lay out the mat) and let the nation decide..”

Asked who the Board members were at the time the decision was made, Papalii said he will reveal that in Court as part of his evidence.

Samoa’s National Provident Fund is a compulsory saving scheme, holding in trust the pensions of over 130,000 members.

In its latest press release, the SNPF announced that it has exceeded the $1 billion tala mark for the total value of its nett assets.