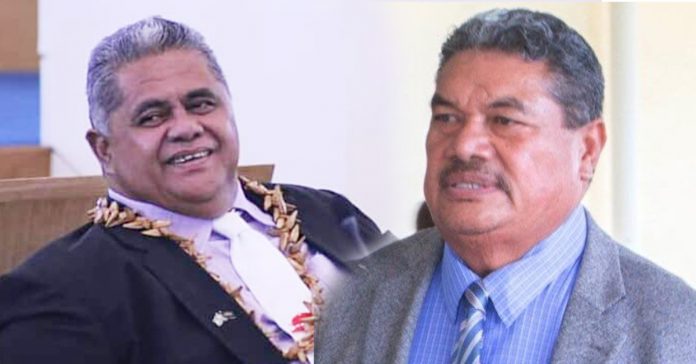 The reduction came after an application made by prosecution on Monday where some 134 charges were consolidated to 49.

The defendants pleaded not guilty to all of the charges, represented by senior members of the New Zealand Bar and Queens Counsels, Kieran Raftery and Aaron Perkins.

La’auli was the first of the five defendants to testify when the trial continued into it’s 3rd week yesterday.

He told the Court when Local Partners first established in October 2012 the initials “L&P stood for their names “L” for La’auli and “P” for his dear friend Peseta, but when it was registered it changed to Local Partners.

He said they both agreed that the shares would be eaqually divided between the two of them on a 50:50 basis.

The Court also heard, they agreed that their names would not be used to register the company because they were both in Parliament at the time. La’auli brought in Martin Schwalger as his representative and Peseta brought in his son Danny Schwenke as a representative.

Defense lawyer Aaron Perkins asked La’auli why he was interested in establishing a nonu company at the time and La’auli in response told the Court that his interest in nonu dated back to 2009 when Reef Shipping’s executive member La’auli Michael Jones contacted him about an agricultural project in Samoa.

Laauli said he and Apulu Lance Polu were involved with Pure Pasefika since 2010 and it started to face financial problems in 2013. He also spoke of a breakdown in communication with its overseas partners so he and Apulu sought ways to save the company.

They came to an agreement to set up a company that will help save Pure Pasefika and its agricultural project and that is how Local Partners & Associates started.

Laauli also told the Court he had discussed with Apulu that he wanted his friend Peseta to join them in setting up the company.

He said Apulu was not happy with his idea of bringing Peseta in, however he eventually agreed to let Peseta join and become part of their plan to set up Local Patnerss & Associates.

In discussing the distribution of shares they agreed that Peseta would have 35% while Apulu and La’auli hold 32.5% each.

Mr. Perkins asked La’auli why they had agreed for Peseta to have more shares and in response La’auli said he and Apulu together still held majority shares, over 60 percent.

The newly formed LPA agreed that they would buy Pure Pasefika with the acquisition bid starting at $1million, and eventually reached $2million tala.

They then applied for a loan from the National Provident Fund (NPF) which required security.

La’auli told the Court he and Apulu’s contribution to the loan as security were the assets and land of Pure Pasefika but they had asked Peseta to contribute to the application of the loan.

The Court heard Peseta had an overdraft of $102,000 on a piece of land at Vaitele belonging to Aldan company which was offered as security if they are willing to pay off the overdraft.

La’auli said they agreed to pay off the overdraft and the land and Peseta was very happy about this.

They also set up a bank account and a cheque book at Westpac Bank when LPA started.
Mr. Perkins also questioned La’auli as to why the name of Samoa Nonu Delights was used for orders and not Local Partners & Associates.

La’auli responded, there was a resolution where they all agreed that a Samoa Nonu Delights will be used as a Trading name but the company will still remain as LPA.

Mr. Perkins also asked La’auli if the purpose for the name Samoa Nonu Delights was to deceive anyone, but La’auli denied this.

He said, the SND name was mainly for trading purposes only, but it was never used to deceive anyone.

Mr. Perkins also questioned Laauli if he was involved in getting the business license under the name Samoa Nonu Delights, but La’auli said he was no and that it was Apulu was the one who was responsible for all of this.

According to Laauli it was during this time that Peseta was starting to have problems with how the company was operating.

“He started to have issues with Apulu saying he didn’t trust Apulu and how he was doing things,

“It all started with Apulu but it ended up that it affected all of us, me Martin and Apulu.”

The court then heard that on the 3rd of April 2014 a meeting of directors was held with the NPF  where Peseta raised his concerns about a lot of things including the hiring of trucks belonging to LPA by Vailima Breweries as extra income for the company.

La’auli said it was at that meeting that Peseta told them that he will no longer be involved in the operation of LPA and he had asked for his land to be returned to him and all his shares to be return to him.

Asked how he felt about this La’auli said he was unhappy at first but he thought about it and realised that this is the best solution for everyone.

“I thought, well this might be the best thing, for him to not be involved in the company anymore and all our problems will be solved,” said La’auli.

However, La’auli said when things were going well Peseta started to interfere again by going around to their customers and stopping them from placng orders with LPS.

La’auli also told the Court that Peseta was telling their customers that he was filing a lawsuit against them and this had affected the work as well as the customers.

“Our customers stopped coming over because they were worried that the lawsuit would affect them,” said La’auli.

“I was very disappointed and I tried to contact Peseta but he did not pick up any of my calls.”

The trial continues with La’auli being crossed examined by prosecution.