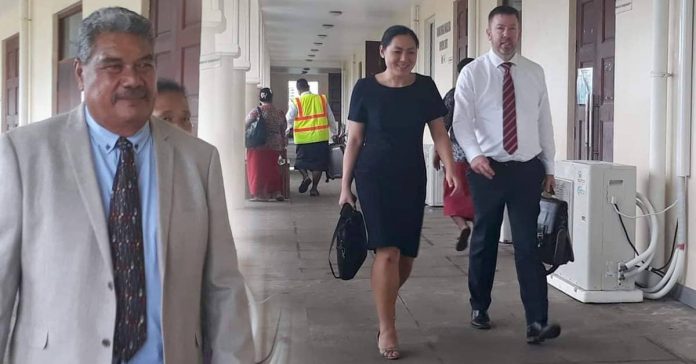 27 June 2019, Apia Samoa. The Associate Minister of the Ministry of the Prime Minister and Cabinet (MPMC) Peseta Vaifou Tevaga tells the Court that he did not know about the decision to open a new bank account under the trading name ‘Samoa Nonu Delights’.

The Member of Parliament for Faasaleleaga No 4 has been giving evidence in the trial of his business partner and former Minister of Agriculture La’auli Leuatea Schmidt, Tu’itu’i Aiolupo, Apulu Lance Polu and Martin Schwalger.

Peseta is a witness for the prosecution led by New Zealand lawyers Mark Williams and co-counsel Kristy Sisi Li assisted by Quentin Sauaga of the Attorney General’s Office.

QC Kieran Raftery famous in Samoa for prosecuting the murder trial of the late Luagalau Levaula Kamu 20 years ago, is representing La’auli while Aaron Perkins QC is appearing for Apulu.

Local counsel, Lefau Harry Schuster is representing Martin Schwalger, Tupea Heather and Tu’itu’i Aiolupo in a trial that is expected to go for 6 weeks.

Peseta began his evidence on Tuesday by speaking about his close relationship with La’auli before Local Partners Associates (LPA) was established.

The Court heard how the two politicians and senior members of the HRPP party had become close friends through their relationship as Members of Parliament.

Peseta told the Court that La’auli was someone he trusted; so he had quickly agreed to La’auli’s idea of putting up a business together.

“I had known La’auli from Parliament and he was a close friend and someone I trusted before we went into business together,” said Peseta.

Peseta added, when the idea of establishing the business was discussed, the intention was to make a profit through the export nonu juice.

Peseta went on to describe how he claims to have discovered a separate bank account into which he alleges LPA income was being banked.

He told the Court that orders from Wilex Samoa to LPA were being made to a company named Samoa Nonu Delights (SND).

“After the second order by WILEX Samoa was made I went and spoke to the manager Eddie Wilson who showed me documents of the orders that were made,” said Peseta.

“I saw that payments of the order were made to the Samoa Nonu Delights account.”

During cross examination by Mr. Perkins, the Associate Minister of MPMC said he had no knowledge of the name change nor of a resolution to make the changes.

According to Peseta when he discovered the new account, he called a meeting in October 2013 which was after two or three orders by Wilex had been made. He said his concern was with the company loan at the National Provident Fund (NPF).

As an example, Peseta said that one of the three orders from Wilex had a total amount of $36,000 but it was never paid to the LPA company account, instead it was paid into the SNDs.

He said, he called the meeting because he wanted to ask Apulu and Martin why the nonu was being traded under a different company name instead of the original company name.

“When I asked them about the name, Apulu and Martin then requested if the name Samoa Nonu Delights could be used for trading purposes,” Peseta told the court.

“I told them and I stopped them from using the SND because it’s not the name that is under the NPF loan.”

Mr. Perkins put it to Peseta that the reason why the name Samoa Nonu Delights was adopted for trading purposes was because Local Partners Associates was struggling with orders.

Peseta denied this saying; “the company was not struggling, there were orders that came in around that time.”

An exhibit of the amended business license to show that LPA was ‘trading as Samoa Nonu Delight’ was shown to Peseta.

Defense counsels also produced a notice of a company resolution about the the changes, which Peseta and his son Danny were copied in.

However, Peseta denied having any knowledge or agreeing to such changes. He also told the Court that he did not receive a copy of the resolutions nor did his son.

Peseta gave evidence that he had requested a meeting with the General Manager of NPF to discuss the change in company name.

He said Apulu, La’auli, his son Danny and Schwalger were at the meeting which took place at NPF in April 2014.

Mr. Perkins asked Peseta about the purpose of the meeting at NPF, Peseta said he wrote to the General Manager to inform her about the name changing that is being used for trading purposes.

“I wanted to inform the General Manager of the National Provident Fund NPF about the changes to the name and ask her to make an order to stop this,” said Peseta.

“The General Manager told all of us that were present at the meeting to stop using the name of Samoa Nonu Delight.”

The charges against the defendants include forgery, theft and obtaining by deception.

The trial continues with Peseta being cross examined by defense counsel today.