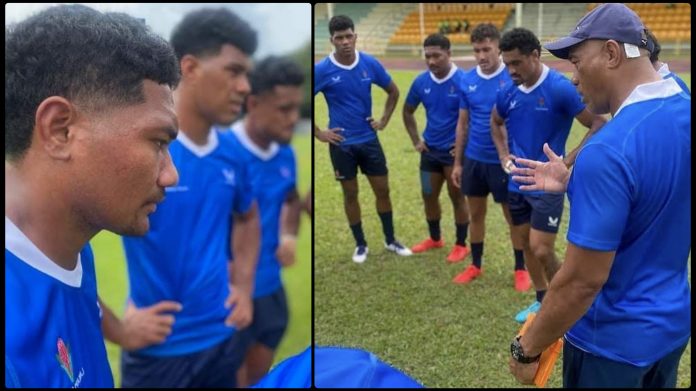 9 April 2022 Apia Samoa. The Manu Samoa 7s arrived into Singapore earlier this week for their first hit out of the HSBC 7s in two years. Reports from the camp say the side are rearing to go since arriving into Singapore earlier this week. The Manu wasted no time to get in a few training sessions when they arrived, including a run with the All Blacks, who are also returning to the International competition after two weeks.

With nine debutants in Muliagatele Brian Lima’s side, the pre-tournament hit-out with the All Blacks 7’s provided the perfect testing ground for the relatively inexperienced boys in blue, and also gave them an opportunity to get a glimpse of what to expect over the weekend.

Due to not being able to participate in an HSBC tournament to date, Samoa and New Zealand find themselves at the bottom of the world rankings going into Singapore.  The Manu 7s are in 18th place and the All Blacks are 19th out of the 19 teams listed.

In an interview with the Head Coach in November last year, Muliagatele had said the most ideal preparation for a 7’s side is to play high quality tournaments week in – week out, but the Manu has had to rely on local competition to build match fitness, and select players into key positions.

“Due to the difficulties of travel with Covid-19 restrictions, we have missed out on the opportunity to join the first legs of the World Rugby Series being played at this time of year, so this national series is the only chance to allow players to showcase what we’ve been working on..

“There are also key positions needed to complement the talent in the current squad,” said Muliagate at the time, “such as a specialist high ball jumper, power forwards and speedsters”.

Muliagatele had originally selected a 20-man travelling squad to take to Dubai, with the intention of camping there for at least three months, to participate in the HSBC World 7s Series. The selection was a mixture of youngsters, experience and veterans. However, a stand-off with players last month resulted in the exodus of five out of six overseas-based players leaving behind an all-local squad, most of whom have never played outside of Apia Park.

Samoa is pooled with three teams in the top 10 of the current HSBC world rankings. Australia is currently ranked 3rd, England is placed 7th and Spain is in 9th place. The games are on Saturday local time, with Australia first up at 4:50pm, England at 7:34pm and Spain at 11:07pm. Singapore is five hours behind Samoa and New Zealand.

Pool A is led by top ranked South Africa, joined by 4th placed USA and Kenya who are currently in 8th place. Canada is in this pool of death.

New Zealand is pooled in group C with Argentina, who are currently placed 2nd in the HSBC world standings. Wales and Scotland have been to all four tournaments this season, but haven’t gotten off a good start placed 12th and 14th respectively.

Gold medalist 7’s side, Fiji, are in Group D. Fiji are currently in 11th place, having attended two of the four tournaments to date. The Pacific cousins are up against France and Ireland who are currently 5th and 6th place. Japan is also in this pool.

The long wait to play an international tournament, and the recent internal challenges that arose within the camp, has brought the team closer together. In an interview with Co-Captain Vaovasa Afa Su’a, he told SGN the boys were focused and team spirit was high within the camp. “The boys can’t wait to take to the field”.

“We don’t take this opportunity lightly. We understand that the whole country has been waiting to watch the Manu Samoa 7s..”

The Co-Captain who has yet to experience an HSBC 7’s tournament is no stranger to high level competition rugby. He has been representing Samoa in the 15’s code since his selection into Samoa A in 2015. He says the boys have undergone intensive training and are now very eager to play.

“The team spirit has been lifted up, especially the mindset of the boys towards the task ahead.. We have been preparing for a long time, and the boys just want to play.”

“Thank you Samoa for your prayers and support during our time here and as we prepare for our first tournament..  We are also fasting and praying for our game, as well as for our families, and our beloved country of Samoa,” said the Co-Captain.