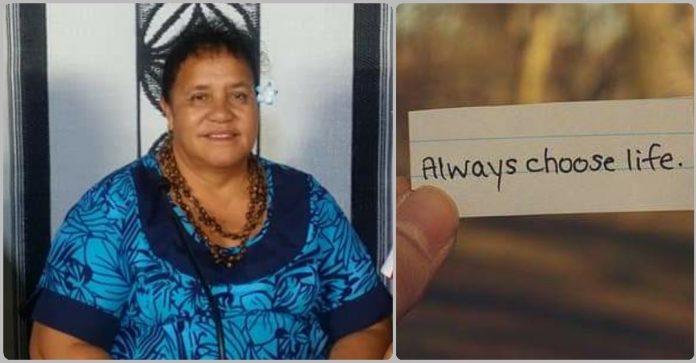 The Fa’ataua le Ola (FLO) established for the purpose of helping to decrease suicide numbers in Samoa, is urging people to always seek assistance if someone is facing overwhelming obstacles in his or her life.

A Non Government Organisation, Faataua Le Ola means value life and with no government social development programmes in this space, has been the only organisation focused on suicide prevention in Samoa.

Temukisa Tuaimau, case officer for FLO, is saddened to hear of three suicide cases in just one weekend reported by police this month.

Police are investigating the separate deaths of a 22 year old mother, a 35 year old woman and a high school boy, all reported deaths last weekend.

Temukisa says FLO is still urging people to reach them anytime through their help line: 800-5433.

“Suicide is not the answer to your problems.”

According to Temukisa there are ongoing awareness programs hosted by FLO, in different villages. The organisation has also established village committees to help push their campaigns on suicide awareness.

“So far there are three village committees in Savaii and three in Upolu,” she says.

The organisation has recently commemorated World Suicide Prevention Day. According to the FLO case officer this was an opportunity to raise awareness to prevent suicide and promote action through proven means that will reduce the number of suicides and suicide attempts globally.

The theme of the Suicide Prevention day was, “Create Hope through Action.”

The program aimed to raise more awareness in the village communities and to inform Samoan people of what to do should they need the organisation’s help.

According to the FLO 1 in every 100 deaths worldwide is the result of suicide.

“It can affect every one of us, said Temukisa who adds, “Samoa was the leading country in the region with suicide rates, in the year 2000 but the rates have dropped. However, the problem still persists. The male population in Samoa make up most of the suicides whereas women are higher in suicide attempts,” she said.

In earlier interviews Papalii has noted that young Samoan men between the ages of 12 and 35 were the most vulnerable.

Faataua le Ola’s public message states, “People who are suicidal may feel trapped or like a burden to their friends, family and those around them and thus feel like they are alone and have no other options;

“The COVID-19 Pandemic has contributed to increased feelings of isolation and vulnerability. By creating hope through action, we can signal to people experiencing suicidal thoughts that there is hope and that we care and want to support them.”

FLO further states that, “The factors and causes that lead to suicide are complex and many. No single approach works for everyone.”

Temukisa reaches out to the public when she beckons to say, “Suicide is never the answer for you.”