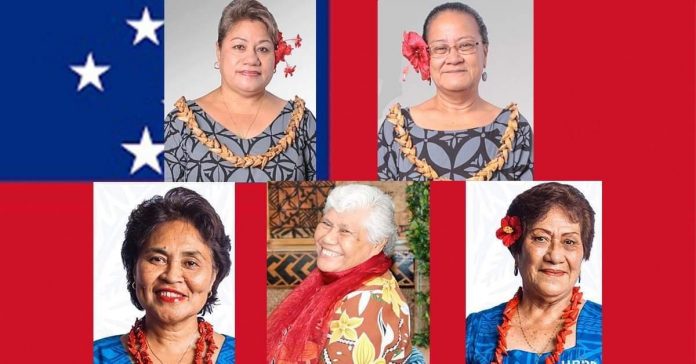 Day 3 of pre-polling for Samoa’s 2021 general election closes with five women candidates leading from their respective constituencies, although it is still early days with thousands of voters yet to take to the polls.

Recent amendments to Samoa’s Electoral Act allowed pre-polling for elderly over 65 years, persons with disabilities and essential workers. Four days of pre-polling from Monday 5th to Thursday 8th is underway causing a level of excitement that may be premature given the current numbers coming in are for the 8,576 registered pre-pollers.

Nonetheless after three days of pre-polling, three FAST and two HRPP women candidates are ahead.

Lolomatauama Eseta Faalata Mataituli, the only FAST candidate vying for the Aana Alofi 2 seat, has taken the lead by only three votes ahead of Aiono Afaese Toleafoa trailing close behind. The constituency has two more HRPP reps and a Tautua Samoa party candidate with Lolomatauama the only woman. 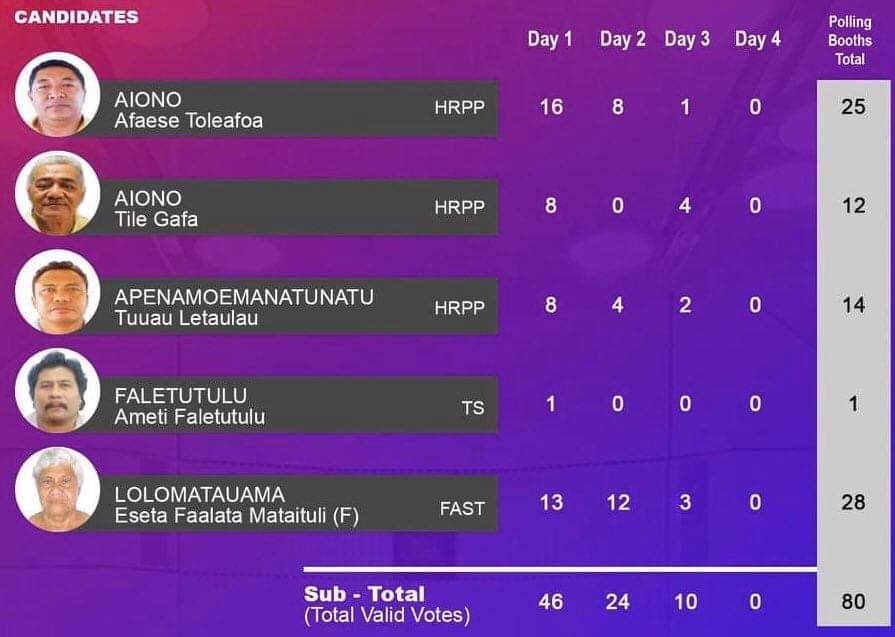 Matamua extended her lead after Day 3 results, when she received 41 votes to Sili Epa Tuioti’s 22 at the Methodist Saletagaloa booth.

Matamua and Sili are the only two vying for the Faasaleleaga 1 seat, after businessman Gasologa Fiu was forced to withdraw after Sili challenged his candidate eligibility in Court last October.

The third FAST party tausala in the lead after Day 3 is General Manager of Western Union Samoa Mulipola Anarosa Ale Molioo, running from Palauli 1. She is leading by 23 votes ahead of businessman and owner of Siva Afi, Leotamanusala Lene Leota of HRPP, currently in close second place. 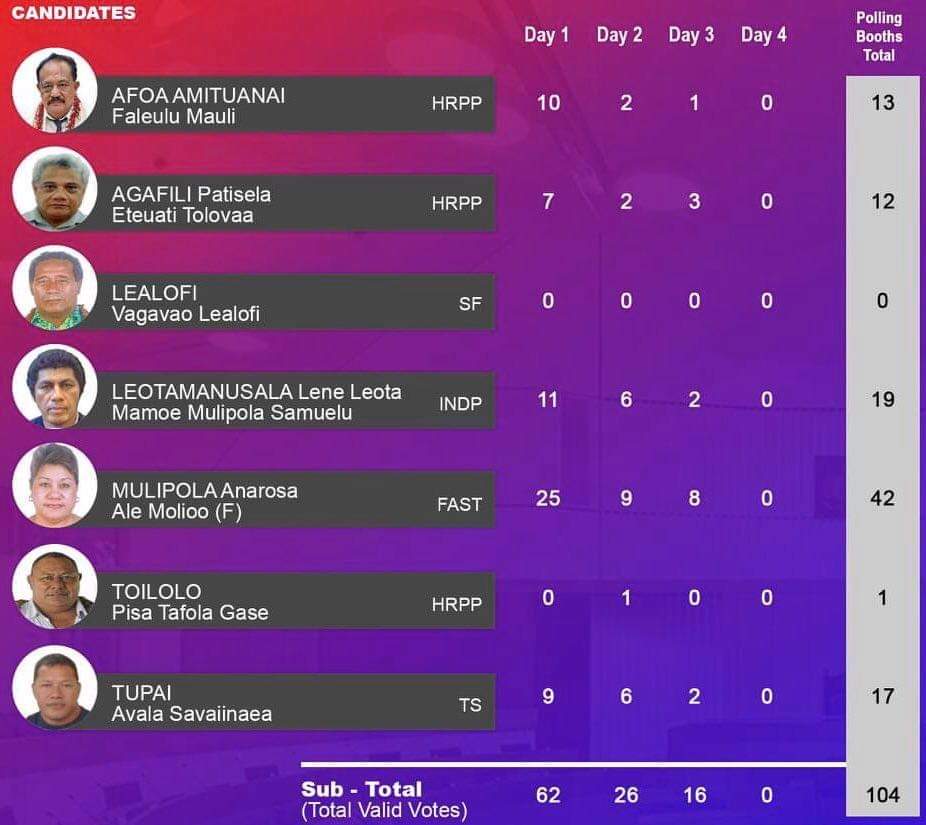 There are 7 candidates in the race for Palauli 1 including incumbent Afoa Amituanai Faleulu Mauli whose seat is being challenged by two other HRPP members, as well as candidates from Samoa First and Tautua Samoa.

On the other hand, HRPP has two women leading their constituencies after Day 3 – Minister of Health Faimalotoa Kika-Stowers Ah Kau and lawyer Leota Aeau Tima Leavai. 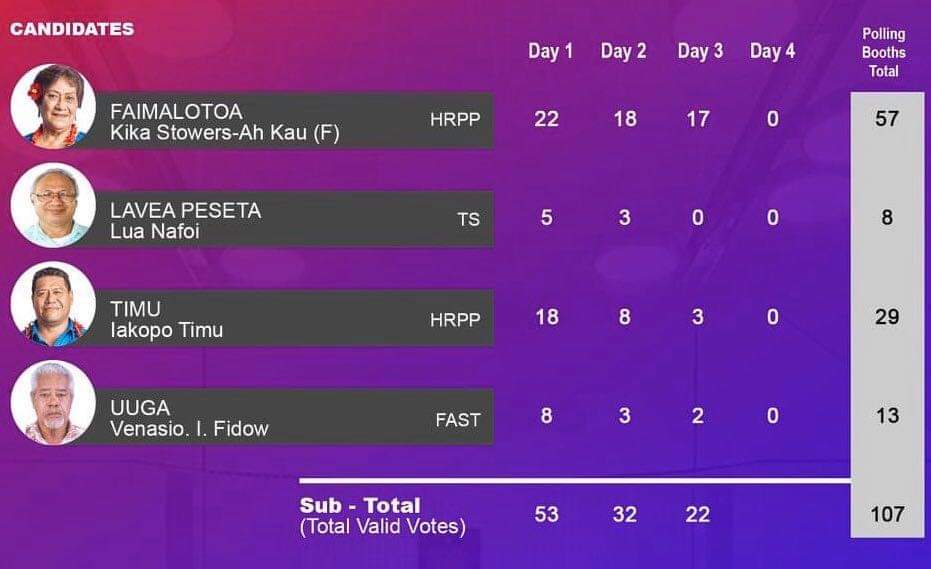 Faimalotoa is leading Gagaifomauga 1 by 31 votes ahead of Timu Iakopo Timu, also an HRPP candidate.

Lawyer and founder of Leavai Law firm Leota Aeau Tima Leavai is leading from the constituency of Falealupo as of Day 3. Leota Aeau is 15 votes ahead of FAST candidate Fuiono Tenina Crichton and 39 votes ahead of fellow HRPP candidate Solia Iosefo Kalolo. 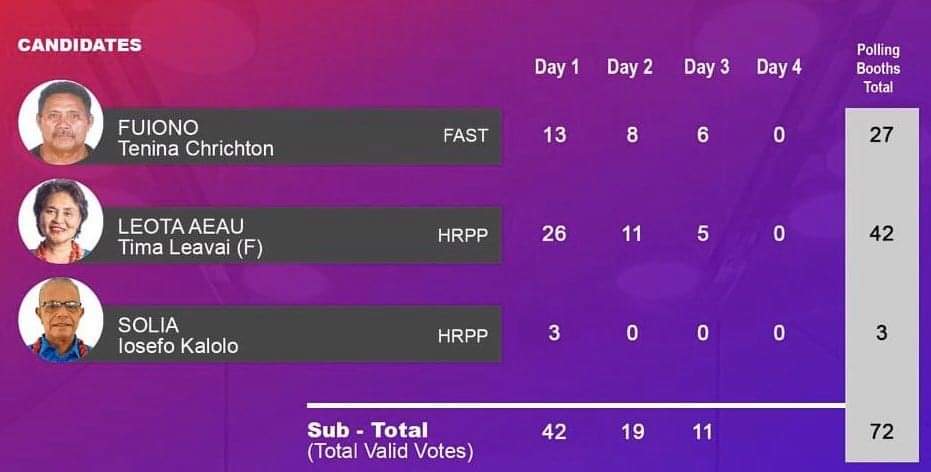 Women in Parliament in Samoa

It was the worst ever result for women in Parliament for Samoa, however, Prime Minister Tuilaepa Sailele Malielegaoi did bring both women into his Cabinet that year. Long serving Minister of Education Hon Fiame Naomi Mataafa became the Minister of Justice, and Hon Gatoloaifaana Amataga Gidlow-Alesana the Minister of Health for 2011-2016.

Samoa then had to bring in a temporary measure under legislation to ensure at least 10% of parliamentary seats would be held by women.

In 2016 this measure came into force when only 4 women out of 24 candidates were voted in. Faaulusau Rosa Lavea Stowers received the highest percentage of votes amongst all women who were unsuccessful, and so became the first woman to enter Parliament under the temporary measure, and ensure the 10% minimum quota was met.

It was easier for Faaulusau to receive the highest percentage as she had been in a 2-candidate race with Hon Laaulialemalietoa Leuatea Polataivao Schmidt.

Of the 21 women vying for parliamentary seats, 11 are from HRPP, six from FAST, two from Tautua Samoa and one each from Samoa First and SIS (Sovereign Independent Samoa).