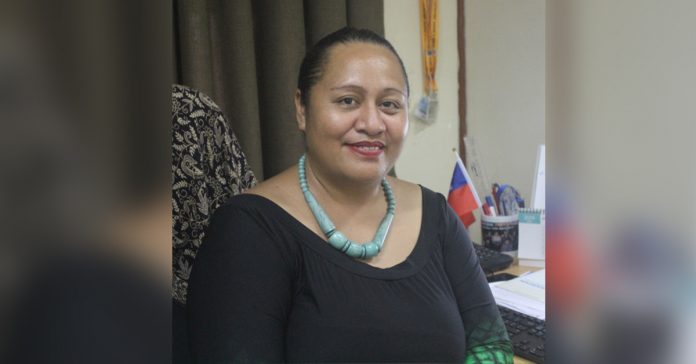 April 5th 2019; U.S. Ambassador to Samoa, Ambassador Scott Brown, has sent his congratulations to Fiso Jennifer Key, Assistant CEO of the Policy, Implementation and Monitoring Division at the Ministry of the Prime Minister & Cabinet who has been named as the Daniel K. Inouye Asia-Pacific Center for Security Studies (DKI APCSS) Alumnus of the Year 2018.

“This is a very prestigious award—to be chosen from amongst the thousands of high-caliber participants who study at APCSS is a very impressive achievement and it reflects the quality of work that Samoa has done on its National Security Strategy,” says Ambassador Brown.

Fiso attended the five-week Advanced Security Cooperation Course at APCSS in Honolulu in 2017.

Fellows attending the course are required to identify a project that they can work on while at APCSS, a project that builds individual, institutional or national/regional capacity and/or advances security cooperation.  During the course, with the help of their classmates and with the advice of faculty members, Fellows develop a plan of action for their project, which they implement upon returning home.  In this case, Fiso identified the drafting of Samoa’s National Security Policy as her project.  She confirmed that the completion of the NSP was a team effort amongst the staff of MPMC.

“This project would not have been possible without the guidance and leadership of my CEO, Agafili Shem Leo, who is the driving force behind the development of Samoa’s first ever National Security Policy.  I’d like to thank my Policy, Implementation and Monitoring Team who worked effortlessly in making this policy a realization. This was a team effort, and when people work collaboratively and cooperatively, great things can be achieved.  I would like to thank the  DKI APCSS faculty and staff for the opportunity granted for pacific islanders to attend courses, and also for the hospitality and great support while we were there.”

All 12,800 plus DKI APCSS alumni are eligible for this annual award.  The Center receives many nominations each year.  Fiso was chosen for this award based on the significance of her achievement and for the impact of this project, not only for Samoa, but also for the positive influence it had on other Oceania countries interested in creating their own national security policy.  The level of impact for her project was at the national and regional level.

“We are so very grateful and proud of Jennifer for putting into practice that which she learned at DKI APCSS, and for taking action to help build Samoa’s security capacity with this significant national policy document.  Her achievement serves as a model, not only for other countries striving to develop similar policies, but it also stands as an outstanding example for all of our alumni,” says John Gasner, Chief, Alumni Division, DKI APCSS. 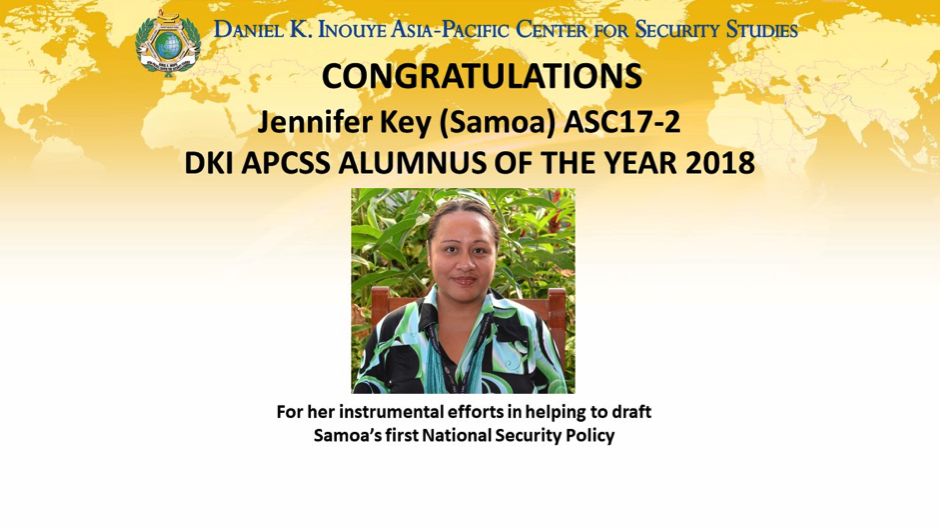 The DKI APCSS is a U.S. Department of Defense institute that officially opened Sept. 4, 1995, in Honolulu, Hawaii. DKI APCSS addresses regional and global security issues, inviting military and civilian representatives of the United States and Asia-Pacific nations to its comprehensive program of executive education and workshops, both in Hawaii and throughout the Indo-Pacific region.