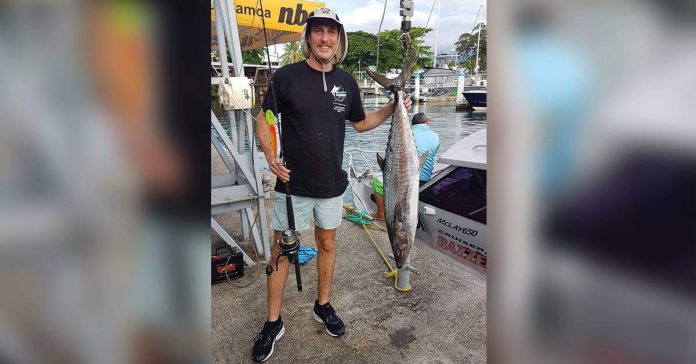 29 April 2019, Apia Samoa.  Team Troppo are in the lead after day one of the 23rd Samoa Game Fishing Tournament.

First time Angler from Australia, Sam Balian who was on board the Pure Indulgence boat caught the heaviest fish of the day at 12.2kg but overall, day one of the tournament did not bring in a lot of fish with weight.

According to Greg Hopping’s recap of the day’s events, four Marlins were dropped which was unlucky for some but bodes well for the rest of the tournament with Anglers hoping to catch the ‘one that got away’ in today’s competition.

Australian Angler, Gavin Crane will be one of those Anglers, after he experienced the disappointment of dropping a black marlin that was estimated to be well over 150kg.

The excitement started quite early for Crane when they hooked the marlin during the morning. He had put up a good two hour fight before his fishing rod gave out under the pressure,

“It was right there and after half an hour I just couldn’t lift it up” Crane said.

“The fish just wouldn’t come up to surface but if it did I would have had the right angle but the line was just straight down. My legs are literally jelly after just that two hours;

“There were plenty of times I wanted to give up but I held on and in the end the rod just exploded, it wasn’t made for that kind of fish;

“Everyone was around me and encouraging me to carry on, feeding me with water.”

However Crane’s team mate, Australian Sam Balian was all smiles after taking bragging rights for his catch of the day. Balian joins a growing list of first time Anglers outperforming in Samoa’s International Game Fishing tournament and he was thrilled to catch a Spanish mackerel with some decent weight.

For Balian and Crane, this isn’t just their first game fishing tournament, it’s also their first time to Samoa.

“Everyone is really friendly, it’s good to have chats when it’s slow fishing.”