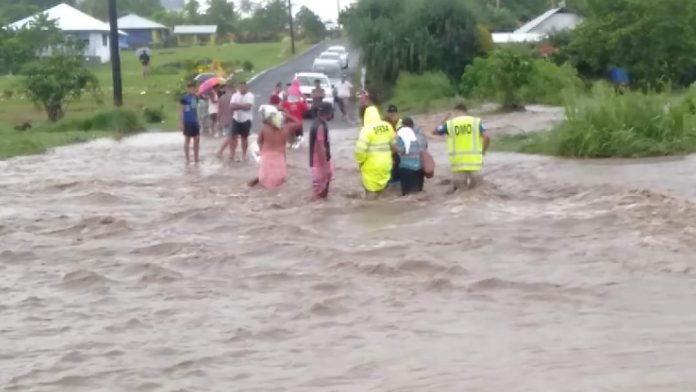 31 Oct 2020, Samoa. Samoa’s first responding authorities including the Disaster Management Office (DMO) and the Fire and Emergency Services (FESA) worked tirelessly into the evening to assist the public trying to get home through flooded road crossings in the Siumu-Safata-Lefaga areas on Friday.

Heavy rainfall had caused flooding to most low lying crossings and fjords along the main roads in these areas.

In some cases, first responder Authorities and Agencies worked together to help nearby residents relocate to safer grounds.

“Small vehicles are unable to cross at the moment, only pick up trucks and higher vehicles”.

The public were reported to be desperately trying to get to their families on the other side of the crossing assisted by FESA and DMO staff.

The public especially residents in Urban Apia trying to get home for the weekend are warned by authorities to “stay vigilant” as more heavy rains are expected overnight.

Images and videos were posted and widely shared, to warn the public of the situation.

“Pedestrians and vehicles are unable to cross at the moment due to heavy rain causing overflow of water on the road.”

“Strongly advising the public travelling out this way to take alternative access to get to your homes as it is unsafe to cross on this side.”

Satellite images shows heavy clouds over American Samoa that affected the nearby South East coast of Upolu yesterday evening. However, a satellite image at 3.10am this morning shows this moving away from Samoa as the night progressed.