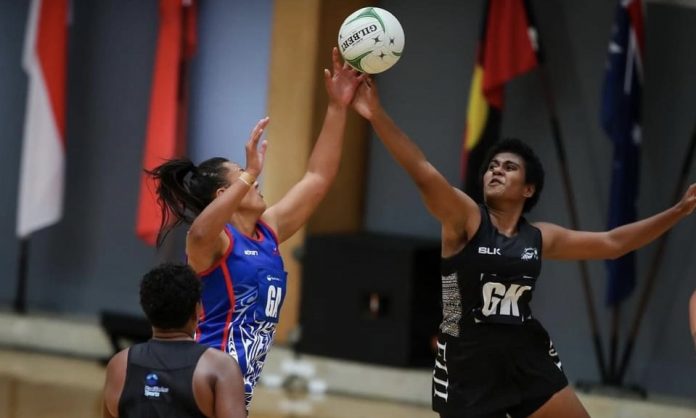 Team Samoa fought hard and took their first loss of the PacificAus series, out on the court on Monday against Fiji with 55-44 on the score board by the final whistle.

Samoa was led by veteran captain Auteletoa Tanimo who led her girls through a match that was closer than the final score suggests. After the first quarter Fiji had a 17-9 lead, but Samoa fought hard to narrow the gap with a comeback that narrowed the gap by just five points, going to half-time behind by 29-24. Samoa had anticipated this game to be physical and it was point for point in the third quarter with Fiji maintaining the lead at 39-34 to go into the last quarter still ahead by 5. Fiji came into the last quarter wanting to take no chances and finally broke the Samoa defense to edge away in the last quarter 55-44.

Netball Samoa sent their fans, families and supporters a message of gratitude; “Faafetai lava to our supporters for the love and prayers for our first game…It wasn’t easy but knowing that we have a huge support base behind us gives us strength and courage.”

With several of the squad selected from outside of Samoa, Netball Samoa emphasised the team’s motto, “We are SAMOANS playing NETBALL first, not NETBALLERS playing for SAMOA.”

Team Samoa will be going back to the drawing board to reflect, regroup and prepare for upcoming games against Tonga, Papua New Guinea and Singapore.

Team Samoa’s fixtures for the rest of the series:

The remaining games of the PacificAus Sports Netball Series will be streamed live and on-demand to audiences from across the globe via http://netballaustralia.tv