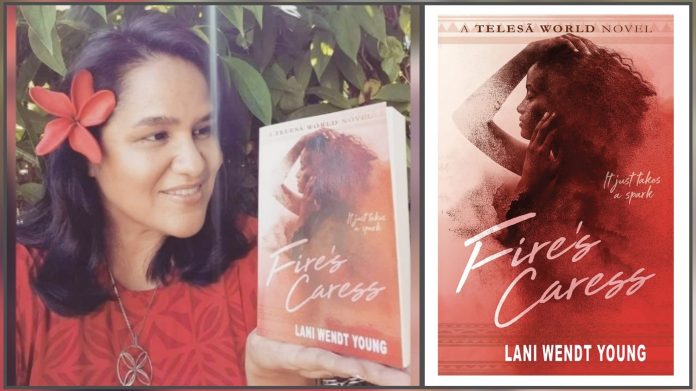 Fire’s Caress is from Wendt Young’s popular Telesa World. In 2022 Fire’s Caress was also nominated as finalist for the 2021 Young Adult Fiction Award in the New Zealand Book Awards for Children and Young Adults.

“Long ago, Tangaloa cast a fiery net upon the waters and drew forth the ocean’s might – in the  crashing  waves  and  surging  tides  that  speak  to  Masina  the  moon.  In  Fire ́ s  Caress the story continues with the next generation of  Telesā.”

The Sir Julius Vogel Awards, administered by SFFANZ, the Science Fiction and Fantasy Association of New Zealand, recognise excellence and acheivement by New Zealanders and New Zealand citizens in science fiction, fantasy and horror over a variety of creative fields

The author acknowledged SFFANZ in a post on her social media from Samoa.

“That shout you just heard from my house here in Lotopa, startling all the birds asleep in the mango tree outside – was me finding out that my book FIRE’S CARESS was announced tonight in Wellington NZ, as the winner of the BEST YOUTH NOVEL award in the 2022 Sir Julius Vogel Awards..

“So grateful and so thrilled for this book from the Telesa World!
Thank you to the Science Fiction and Fantasy Association of NZ..

“Thank you to everyone who supported this book, my awesome NZ publisher OneTree House Press..

“And thank you to the fabulous readers who have embraced my stories from the start and been amazing about celebrating these books. Faafetai lava”.

“Today is a good day to be a writer,” she adds.

The Sir Julius Vogel Awards, administered by SFFANZ, the Science Fiction and Fantasy Association of New Zealand, recognise excellence and acheivement by New Zealanders and New Zealand citizens in science fiction, fantasy and horror over a variety of creative fields

Lani Young is a Samoan/Maori author and columnist. In 2018, she was named the ACP Pacific Laureate, selected by the African, Caribbean, Pacific Group of States as they paid tribute to her ‘creativity, courage and entrepreneurship’. The ACP acknowledged her fiction writing, utilizing of digital publishing to take Samoan stories to a global audience, and also her journalism.

She’s the author of ten books including the international bestselling Young Adult TELESA series, and PACIFIC TSUNAMI GALU AFI which tells the story of the 2009 disaster. She’s worked as a scriptwriter for Disney, and her stories for children are published by the NZ School Journal.

She was the 2018 recipient of the Douglas Gabb Australia-Pacific Journalism internship and in 2017 her reporting on climate change issues in the Pacific won her a coveted fellowship award covering the UN Climate Conference in Bonn, Germany. In 2012 she won the USP Press Prize with her collection of short fiction, Afakasi Woman.

Lani writes columns about feminism, religion, culture, parenting, LGBTI in Pasifika, climate justice and everything in between. Her essay on A Samoan Woman’s Perspective on Ordain Women features in the Oxford Univ Press 2015 collection Mormon Feminism:Essential Writings.  Her writing on child sexual abuse and domestic violence in Pasifika communities has generated dialogue in many forums worldwide.