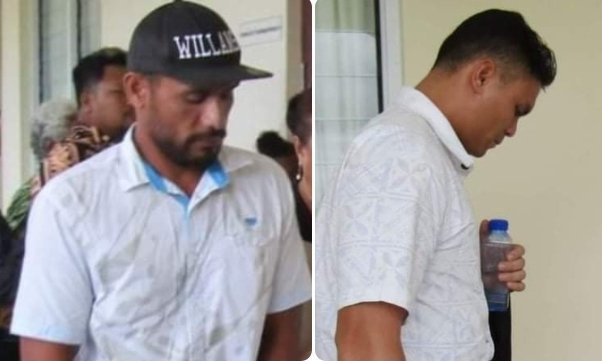 Counsel Submissions for the trial of Herman Westerlund and Suapaina Savaiinaea were presented before Justice Mata Tuatagaloa in the Supreme Court of Samoa last Friday.

The two week long judge-only trial of the two young men accused of causing the death of Jeremiah ‘Malaki’ Akeli Tauiliili of Letogo, Laulii and Fasito’otai was held earlier this year in February. Last week it resumed with lawyers from all sides putting forth final submissions to Justice Tuatagaloa.

The tragic incident involving youth in a nightclub on the eve of 30th November 2018 ignited a wave of abusive social media posts from members of the public taking sides, many calling for #Justice4Malaki, who is the son of Samoa’s Member of Parliament for Vaimauga i Sasa’e, Sulamanaia Fetaiai Tuivasa Tauiliili.

The Court heard lead prosecutor Silupevaelei Rexona Titi submitting that their case has proven the three elements of murder and two of the lesser charge of manslaughter, submitted as an alternative should the Court not be satisfied that the acts constituted murder.

For the murder charge, prosecution submitted the three elements to be; firstly that each defendant committed an unlawful act namely assault on the deaceased…secondly that the unlawful act caused the death of Malaki…and thirdly for the charge of murder, each defendant had intended to cause bodily injuries to the deceased.

Prosecution submitted that the defendant Herman Westerlund’s first punch caused the AUT Bachelor of Engineering graduate to fall backwards on the floor. Silupevaelei Rexona argued that before Malaki landed on the floor, Herman threw another punch that caused Malaki to land heavily with his head taking the brunt of the fall as it made contact with the floor.

Prosecution further submitted that after the deceased landed on the floor, Herman delivered another two further punches, that struck Malaki on the face as he lay motionless.

Prosecution told the Court that this evidence is confirmed by witnesses, “clearly showing that Herman assulted Jeremiah four times”.

According to Herman Westerlund’s caution statement, he had told police that he threw two punches before Jeremiah landed on the floor.

Prosecution submitted that other witnesses spoke of further punches threw by Herman while he was on the floor with Jeremiah.

Prosecution reminded the Court of the witness who described the sound of Malaki’s head hitting the floor, “like a stone being thrown to the ground”.

“Herman did not just assault Jeremiah, but it was an on going assault, even when Jeremiah was lying motionless”.

Prosecution submitted that while Jeremiah lay motionless Herman did have ‘Wreckless Intent’ to continue his assault.

“He didin’t care at that time about the injuries caused”.

In relation to Suapaina Savaiinaea, Prosecution submitted that six witnesses provided evidence to prove that Suapaina kicked Malaki on the head, again, as he lay moitonless on the floor.

“It is life threatning because he was motionless, and the kick was aimed at the head. He was vulnerable and was not aware of the assault. He was defenseless with no way to protect himself”, argued Silupevaelei Rexona Titi.

“Both defendants in their assaults caused the death of Jeremiah Malaki.”

Prosecution further reminded the Court about the testimony of FESA as first reapondents.

“He never woke up, the only movement we saw were his fits, but he never opened his eyes.”

Prosecution spoke to the medical reports by doctors who attended to the Malaki when he arrived at hospital. Reports outlined the seriousness of Jeremiah’s condition, confirming brain damage that needed urgent surgery.

Silupevaelei submitted that the Pathologist report proves Malaki presented to the hospital in a coma, from which he never woke up. They concluded therefore that his death a few days later on the 5th of December was caused by any of the described contacts…

“The fall, the kick, and the on going assault..any of those could be a sufficient cause of brain damage”.

Counsel for Herman Westerlund, Mr Aaron Perkins made his submissions via video link from New Zealand.

In a 40-page sunmission, the highly experienced Queens Counsel (QC) argued that Herman had been trying to usher Jeremiah away by standing between Jeremiah and Rob Ash who was the first of the group to throw a punch toward Malaki.

“Herman immediately stepped in between Mr Ash and Jeremiah, trying to stop what would otherwise have been a fight;

“Even with how angry and determined Jeremiah was, Herman put his safety at risk, while others stood by, even pulled their friends away to avoid involvement”.

Referring to a video that was repeatedly played in Court during the week long trial, Mr Perkins said that, “Herman is demonstrating a genuine regard to take Jeremiah into safety.. Herman is putting his safety at risk.. Herman could have given up at some point, to face the determined resistance by Jeremiah but he did not”.

Defense Counsel for Suapaina Savaiinaea, Leiataualesa Jerry Brunt told the court that Suapaina does not deny kicking Jeremiah on the head, however, they are submitting the possibility based on the evidence from Prosecution’s own witnesses, that there may have been more than one person – another kick apart from Suapaina’s.

Leiataualesa Jerry Brunt stated that there is no evidence that Suapaina was involved in the lead up to the incident and also submitted that there is the posibility given that it was a nightclub late at night, that witnesses may have all been drunk.

“Some of the witnesses would have started drinking straight after work”.

Leiataualesa argued that there was a discrepancy in the testimonies of prosecution witnesses with some demonstrating a full kick while others said that it was just a a’a.

He also submitted that some witnesses saw a man who walked from the other side of the bar come through and kick Jeremiah on the head and then walked outside, but others said that a man came from the bar kicked him on the ead and walked back to the bar.

“So it is posible that there are two people who kicked the deceased on the head that night”.

Justice Mata Tuatagaloa has reserved her decision and would inform counsels from all sides when it is ready.