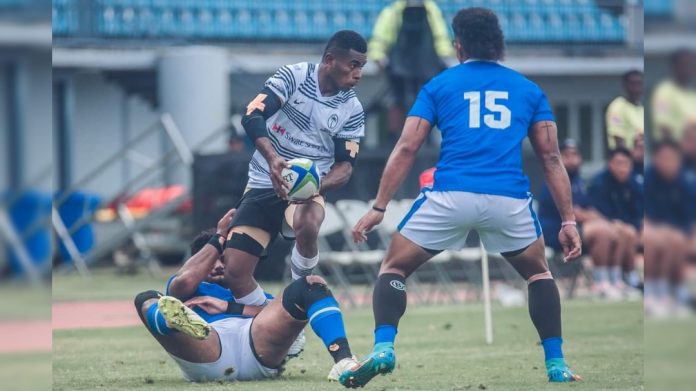 The Samoans were a much-improved side compared to their 60-10 loss last Saturday. They scored three tries to the Warriors’ six.

It was a slow start from both teams. The Warriors had their chance in the 11th minute when they were awarded a penalty but fullback Jack Volavola was way off target.

Captain Tetiva Ikanivere opened the scoresheet for the Fijian Warriors in the 11th minute but Manuma Samoa bounced back and leveled it all four minutes later with a try from Fritz Rayasi.

After a few set-pieces plays, winger Kini Vosailagi dived in the corner and extended the home side’s lead to 10-5.

Samoa kept up the momentum and didn’t back off, which paid off when lock Miracle Faiilagi scored Manuma’s second try with the conversion going over for a 12-10 lead.

On the 30th minute, it was Joseva Nasaroa who pushed over the Samoan defense and got a try under his name.

A minute away from half time Samoa’s first five eighth Tauvaga Kolena intercepted a loose pass to score Manuma’s third try as they again took the lead 19-17.

The lead was cut short when Nasaroa pulled his second try for the home side. Swire Shipping Fijian Warriors took a narrow lead of 22-19 at halftime.

In the second spell, Samoa again leveled it up 22-all after Faletoi Peni slotted in a penalty kick.

Fiji captain Ikanivere then scored his second while Emmanuel Manu got one try off the bench to seal the match 39-22.

Captain Ikanivere said it was good to get the second win against a much prepared Samoan side.

“Samoa came prepared for this match but I salute my boys for standing tall and fighting until the last minute.

“It had been a great learning curve for the young players and these two matches will definitely help them personally in terms of enhancing their career in rugby” said Ikanivere.