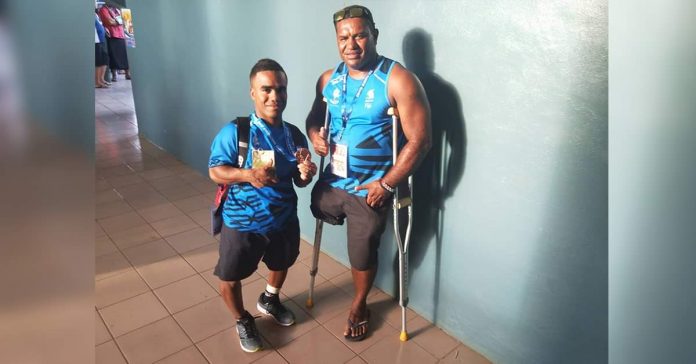 We caught up with Iosefo and his Coach Jone Bogidrau after the medal ceremony. Coach Bogidrau said that they have been training hard since the end of last year so they had come to the Pacific Games expecting to take a medal back home.

“Our little mistakes caused our downfall to Bronze but well will go back, regroup, train harder and improve,”

“Next time we come back we’ll be sure to take the Gold,” says coach Jone Bodigrau who coaches the Fijian athletic field events in addition to the ambulant track and field events.

Iosefo told Samoa Global News that he dedicated his win to his family and friends back at home.

“I want to go back to Fiji and show my community what I have achieved and give them thanks for all their support,” said Iosefo.

He added that this his first time in Samoa and he is loving every minute of it, joking with us that he is also single and that this would be a good fact to add to our story 🙂

In a more serious note Iosefo doesn’t have time to relax too much after the Pacific Games because he has already qualified for the Paralympics 2020 in  Japan and will be attending the World Championships in Dubai later this year.

“I will throw shotput and javelin at the World Chaps and the Paralympics 2020, but for Pacific Games there was no Shotput event for the men’s division.

The Samoa XVI Pacific Games is the first time parasport events have been included with four sports under athletics including the 100m dash for both men and women.

Coach Bodigrau says that he hopes more and more events will continue to be added as the Pacific Games becomes more inclusive.