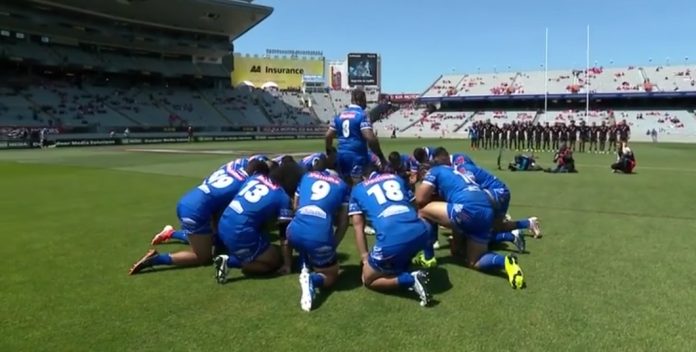 Toa Samoa are ruled out of the race for promotion to Group A of the Oceania Cup with a 44-18 loss to a dominant Fiji Bati side at Eden Park this afternoon.

Toa Samoa placed themselves under pressure with an unforced error that saw Fiji capitalise with an early try from their dummy half Joe Lovodua.

Fiji didn’t mess around taking a strong set of six from the kick-off to score another try through some sloppy Samoa defence.

Matt Parish’s boys struggled to get out of their own half and Fiji continued to attack. Good field position put pressure on the Toa defence that led to Fiji’s 3rd try by Viliame Kikau, converted by Wakeham.

Samoa finally cross over the line from a Martin Tapau carry that allowed halfback Jerome Luai to play a quick ball which he gives to Tim Lafai. The Toa Samoa centre goes over to score and then also convert Samoa’s first try.

Toa Samoa again struggled to complete their sets. Fiji takes full advantage of possession in Samoa’s own half and Kikau goes in to score his second before half time.

After a dominating first half from Fiji they lead at half time by a score of 30-6.

Samoa came out in the second half looking to get back in the game with good field position but again handling errors cost them and they kept giving the ball away to Fiji.

Samoa did strike back with their second try when winger Jorge Taufua crossed over and this time Tim Lafai misses the conversion.

Fiji hit straight back and another handling error turned the ball over sending Lumelume to extend Fiji’s lead to 34-10.

The pain for Toa Samoa fans did not end there. With another handling error Fiji produced a try out of nothing and Williame goes over for Fiji’s 6th try of the afternoon.  Next up Kevin Naiqama goes in to score from a scrum feed.

Jorge Taufua finally scores another try for Toa Samoa when quick hands through the backline put the hitman winger into space.

On the 80th minute some razzle dazzle from Toa Samoa allows Luai to break free and give a good pass to fullback Ronaldo Mulitalo who scores a consolation try.

Fiji put on a dominant performance winning 44-18 over the Toa Samoa.