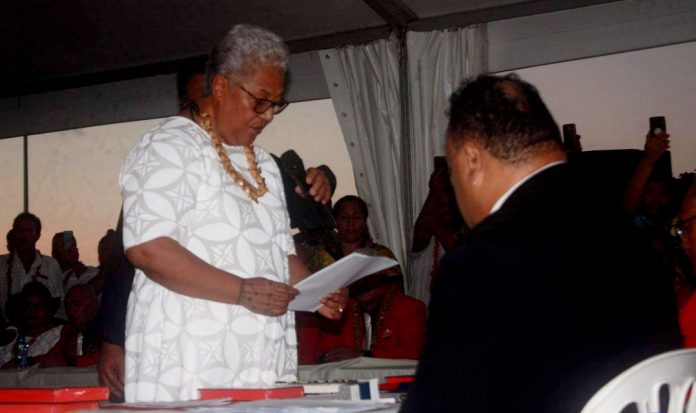 The Faatuatua i Le Atua Samoa ua Tasi (FAST) Party on the basis that Parliament should convene within 45 days of a General Election, conducted a swearing in ceremony on the grounds of Parliament on Monday afternoon.

Held under a large marquee and attended by over a thousand supporters from the 26 constituents represented by FAST elected members, the church service was conducted by the Chairman of the EFKS Congregational Christian Church of Samoa, Reverend Elder Iosefa Atapana Uilelea.

At the ceremony, FAST leader and pioneer for women’s leadership in Samoa, Hon Fiame Naomi Mataafa was declared Prime Minister, and then announced a line-up of Cabinet Ministers. Fiame read out her own name first as Prime Minister and Minister of Foreign Affairs, the Office of the Attorney General, the Ombudsman and the Samoa Public Commission as well as the National Emergency Operations Centre.

The Independent member who crossed over to give FAST the 26 majority, Tuala Tevaga Ponifasio was named Deputy Prime Minister and Minister of Customs and Revenue.

There was a loud applause and cheering when founder of FAST party, Laaulialemalietoa Polataivao Schmidt was named as Minister of Agriculture & Fishers and the Scientific Research Organisation of Samoa (SROS).

Leatinuu was selected as Minister of Commerce Industry and Labour, a portfolio that comes with overseeing Public Enterprises such as Samoa Sports Facilities (SSFA), Samoa Life Assurance Corporation (SLAC), Gambling Control Authority (GCA) and the Accident Compensation Corporation (ACC). There was also specific mention of regional trade agreements PICTA and PACER Plus, adding Trade to the portfolio.

Former Manager of Western Union and businesswoman Mulipola Anarosa Molioo was named Minister of Finance, which includes the Central Bank and Development Bank of Samoa while the women who edged out Sili Epa Tuioti at the general elections, Matamua Vasati Sili Pulufana was named Minister of Justice, as well as the Samoa Law Reform Commission.

Former Judge of the District Court Faualo Lefau Harry Schuster was named Minister of Police and Prisons, FESA and the Office of the Electoral Commissioner. Not surprising was Toeolesulusulu Cedric Pose Schuster as Minister for Natural Resources and Environment.

Former government CEO Toelupe Pou Onesemo was named Minister of Communication and Information Technology, a portfolio that includes the Office of the Regulator and Radio 2AP, while Certified Public Accountant Leota Laki Lamositele gets the Minister of Women Community and Social Development.

In a press conference shortly after the ceremony, the caretaker Prime Minister Hon Tuilaepa Dr Sailele Malielegaoi called the swearing in a coup, accusing FAST members of treason. He said the caretaker government remains in power and called on public servants to continue their work under the leadership of his cabinet. Attorney General Savalenoa Mareva Betham-Annandale has issued a public notice declaring the ceremony unconstitutional. A second press release from the Office of the Attorney General outlined sections of the Constitution that required Parliamentarians to be sworn in by the Head of State. The Attorney General threatened, “persons involved in these unlawful proceedings are subject to civil and criminal prosecution under the law”.

FAST lawyer and former Attorney General Taulapapa Brenda Heather-Latu has also issued a statement outlining reasons why Parliament had to convene within 45 days of general elections and the basis for the process followed, “justified according to the doctrine of necessity.”

Taulapapa said both the Head of State and Council of Deputy were invited to attend and refused. The Legislative Assembly were also asked to assist and refused, and Parliament House was locked, ignoring Court orders that Parliament should convene and the Head of State must take notice of his obligation to call a meeting of the Legislative Assembly.

“The assembled members declared elected on 12 & 16 April 2021 under warrant could meet, as 26 is the quorum”, said Taulapapa.

“They resolved to appoint an Acting Clerk to preside until the Speaker was chosen by resolution. The speaker then swore in the rest of the Members, as well as the Prime Minister and Ministers”.

“Due to the refusal of the officeholders to assist, the Assembly made the necessary resolutions for other persons to step in to take their place. Those decisions justified according to the doctrine of necessity”, added Taulapapa.

With both sides of the political saga now declaring themselves the presiding Government…and each other others’ actions illegal, more Court cases can be expected before the people of Samoa can finally see stability following its April 9th General Elections.