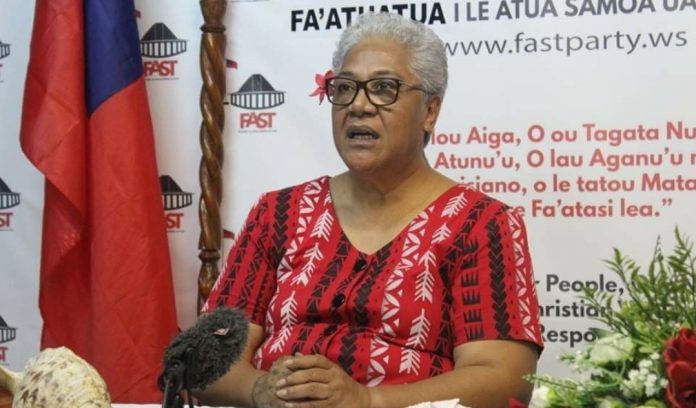 Samoa should remain calm as they await the most highly anticipated decision by Independent member for Gagaemauga 1, holding the balance of power for it’s Parliament following the official results of its General Elections 2021.

This was the message from FAST party leader Hon Fiame Naomi Mataafa at a press conference held this morning.

Fiame says they have been in contact with Tuala and are looking to the beginning of the week to hold discussions with him.

“No doubt Tuala would also be meeting with Tuilaepa and his side,” said Fiame.

Fiame calls on Samoa to wait calmly for the decision which she says, is Tuala’s alone to make.

The former Deputy Prime Minister says the final decision, whatever that may be, should be made known next week.

MP for Gagaemauga 1, Tuala Tevaga Iosefo Ponifasio told the media earlier in the week that he would not make a decision until the official election results were announced.

This was done on Friday evening with a declaration signed by the Head of State, Tuimalealiifano Vaaletoa Sualauvi II, confirming the preliminary results of 25 seats for the Human Rights Protection Party and 25 for Faatuatua i Le Atua Samoa ua Tasi.

Asked her thoughts about the many court cases looming, Fiame said it would be careless of them to not prepare for inevitable cases arising from the elections, as they have heard HRPP would be lodging some of their own.

Samoa is now in the formal period for lodging complaints between candidates and Fiame says the full picture of how many election related cases Samoa has to face will also be know by the end of next week.

“We do have a legal team and they have all those matters in hand. We would not only be responding, we’re also looking at issues where we would make submissions to the Court.”