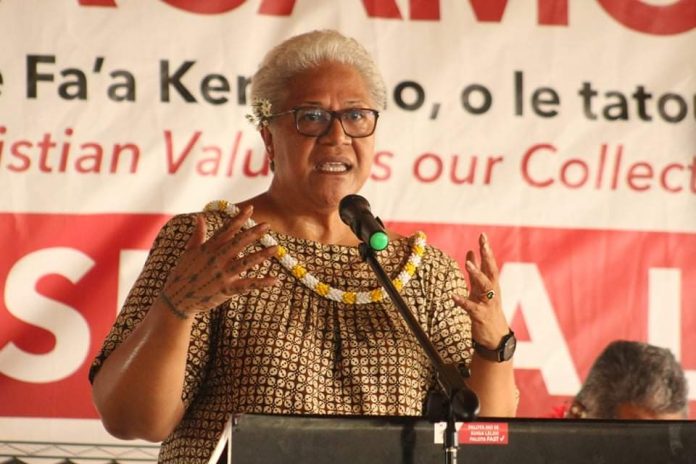 Former Deputy Prime Minister Hon Fiame Naomi Mataafa took the opportunity to push for more women in Parliament during her presentation as a guest speaker at the FAST party community engagement rally for the Aana Alofi constituent, when she reminded the people of Fasitoouta and Faleasiu that from their villages, came Samoa’s pioneer women parliamentarians.

Fiame, herself Samoa’s first ever Cabinet Minister and Deputy Prime Minister, listed other women from Fasitoouta and Faleasiu who had been supported by the Aana Alofi constituency to enter Parliament including the late Aiono Su’amataia Fanaafi Le Tagaloa, the late Matatumua Maimoagaisini and lawyer Maiava Visekota Peteru.

Fiame said the wise decision in the past should continue, and called for the constituency to support Faatuatua i Le Atua Samoa ua Tasi FAST candidate, Lolomatauama Eseta Faalata Mataitusi, to be the next Member of Parliament for Aana Alofi No2.

Fiame commended Fasitoouta and Faleasiu for making the historical decision to select a woman representative in the early 1970s, two decades before universal suffrage, and during a time when non-matai mostly women, were unable to vote in general elections for Samoa.

Fiame told those who attended the FAST rally that as a long-serving Member of Parliament, she advises Aana Alofi No1 to look again at choosing a woman representative, because in times of difficult decisions and controversy, the voice of women becomes even more crucial in Parliamentary debates.

Fiame referred to Samoa customary beliefs that women are the mediators who resolve conflict and iron out issues within communities.

Samoa’s track record of electing women into Parliament has not been good, triggering the temporary measure currently in place, to ensure that at least 10% or 5 women are in Parliament at any one time. Fiame stressed the importance of gender equality to ensure a high level of knowledge and skills in decision-making and leadership in Samoa.

Lolomatauama was a teacher for persons with disabilities and according to Fiamē Parliament needs Members of Parliament like Lolomatauama, who can bring her knowledge and years of experience of the education sector into Parliamentary discussions and decisions involving this key pillar of development for any nation.

“Education is not just about school buildings, but strategies set by Government to implement effective educational programs..”