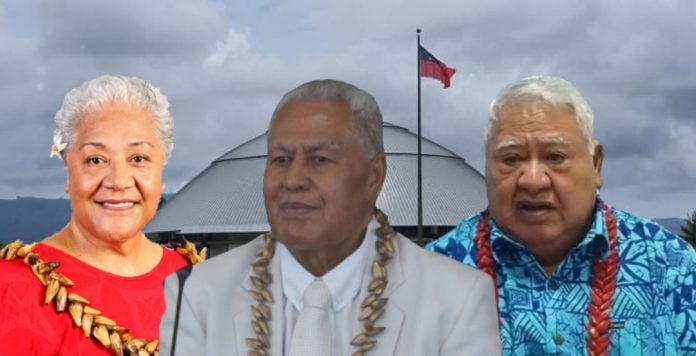 In the press statement published in verbatim below, Fiame acknowledges the Head of State’s position to bring together Members elected by the people at the 9th April General Elections.

The announcement comes at a time of uncertainty given that in a live broadcast on Monday night, Hon Tuilaepa Dr Sailele Malielegaoi said Parliament could not convene until the 75 post election petitions were heard and decided by the Courts.

The official notice to convene Parliament has not yet been released, however, the Clerk of the Legislative Assembly Tiatia Graeme Tualaulelei says they are expecting it soon, and in time for their own preparations.

“His Highness is aware of his obligation to call Parliament within 45 days which expires next week. We are expecting the notice declaring the date of the State Opening of the XVII Parliament, hopefully by today (Thurs 20th).. which gives us sufficient time to prepare and give public notice”, says Tiatia in an email to Samoa Global News.

In other events from Wednesday morning, the FAST leader calls out the way a visit to the Head of State’s residence by his village of Falelatai, was said to have created a state of civil unrest, when a press conference by Tuilaepa called for peace in Samoa.

“Leaders must always act in the best interests and for the welfare of their people. Creating an impression of unrest where none exists, is both mischievous and potentially disruptive, and needs to stop immediately”, says the Sao Faapito.

Fiame’s message is published below in verbatim.

‘Peace like a river attends our way [in Samoa]’ so starts a famous hymn that ends with the refrain that ‘It is well with my soul’.

I greet you all and thank you again for your patience and forbearance and provide the following update of events.

I formally acknowledge the Revocation of the Emergency Orders issued on 12 May 2021 (at around midnight last night) which were primarily enacted to allow the changes to the usual Electoral processes, for the second General Elections proposed by the Caretaker Prime Minister and struck down by the Supreme Court on Monday.

There will be no second General Election on Friday, and everyone  can continue with their normal lives, without the cost and inconvenience of an unnecessary repeat of what has already occurred.

I acknowledge the early press release by the CEO of the Ministry of Commerce Industry & Labour (MCIL), yesterday afternoon cancelling the scheduled Public Holidays for the cancelled elections on Thursday and Friday, and like you, would have enjoyed some days off but only when they are holidays which are valid and lawful. Thank you to Pulotu for his timely action.

After Monday’s Court decisions I can advise that the Caretaker Government has filed an appeal against the decision declaring the addition of a 6th women Member of Parliament is unlawful, and are trying to stop the result from being implemented by asking the Court to ‘stay’ or stop the effect of the decision which was not legally made. That application for a stay will be heard in the Supreme Court tomorrow, Thursday 20th May, before the Honourable Chief Justice and other judges of the Supreme Court.

In beginning my statement with a reference to a well known hymn, a curious incident occurred this morning where the Head of State’s village came to his residence in Vailele to offer him their support and respect. Instead that very honourable and commonplace visit was the subject of a bizarre press statement by the Caretaker Prime Minister half an hour after their arrival in Vailele, calling for calm and peace.

There is no change to the peace and harmony which we have always enjoyed in this country at this time, and there is no reason to create one by miscalling a courtesy visit by the Head of State’s district.

Leaders must always act in the best interests and for the welfare of their people. Creating an impression of unrest where none exists, is both mischievous and potentially disruptive, and needs to stop immediately.

On a more positive note, I am pleased to advise that the Deputy Leader: Laauli Leuatea and I have met this afternoon with His Highness the Head of State, who has agreed to convene Parliament, and we have respectfully requested that this take place on Friday 21st May so that the votes cast by all of you on 9 April 2021 (now almost 6 weeks ago), can be finally brought to their ultimate conclusion by the swearing in of the Members of Parliament whom you wish to lead this country for the next five years.

I am grateful to the Head of State for acknowledging the critical role of Parliament and the need to bring together those who have been elected in order to form Government and get on with the role of governing this country.

There is also a Greek proverb that says…

‘A society grows when old men and women plant trees whose shade they know they will never sit in….’

The arrangements we are making now, and the cases which we have fought, will benefit the future of this nation and our children, so they may enjoy the fruits of a strong fair and just democracy built upon God, in whom we trust.