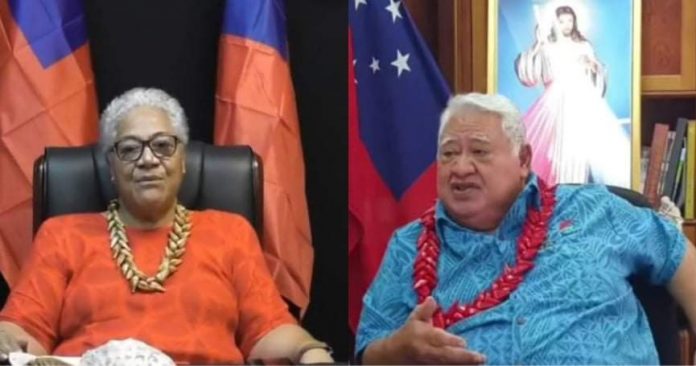 Monday 31 May, Apia Samoa. Prime Minister Elect Fiame Naomi Mataafa has declined an invitation to a meeting called by Caretaker Prime Minister Tuilaepa Sailele Malielegaoi expected to be held at Mulinuu this morning.

In a live broadcast aired last night, Fiame explains that she had received a letter on Saturday afternoon from Tuilaepa, inviting her to a meeting to resolve the current political crisis through dialogue amongst chiefs and clergy through the National Council of Churches.

The meeting, to be held on Parliament grounds, is said to be an attempt to solve the current political crisis using a cultural approach.

“Tuialepa believes the solution of the current problems facing Samoa’s General Elections results can be solved by customs and traditions, and through Samoa’s Christian foundation;

“Samoa, that is not right. We are a nation built on the Rule of Law”, said Fiame.

Fiame says Tuilaepa no longer wants to uphold the Rule of Law and this attempt is an approach that diverts away from the Law and decisions of the Court.

“That same disregard for the Law is the basis of Tuilaepa refusing to accept the results of the general election, which is 26 FAST to 25 seats for HRPP”.

Fiame confirms she has written back to decline the invitation; as she and members of the FAST party shall await the decision of the Appeals Court.

Adjacent to where the intended meeting would be held, the Court of Appeal is set to hear the question of whether the minimum requirement of Article 44(1A) of Samoa’s constitution translates to 5 or 6 women.

The Supreme Court in its decision of 17th May declared the appointment of Aliimalemanu Alofa Tuuau as an additional Member of Parliament, unconstitutional and void.

In a live broadcast on Friday, Tuilaepa said he would accept the decision of the Court of Appeal.

He referred to an HRPP meeting to be held Monday morning at Mulinuu but said it was a meeting of HRPP supporters as they tapuai the Court hearing.

Tuilaepa did mention a “cultural approach” would be taken on Monday, but did not elaborate.