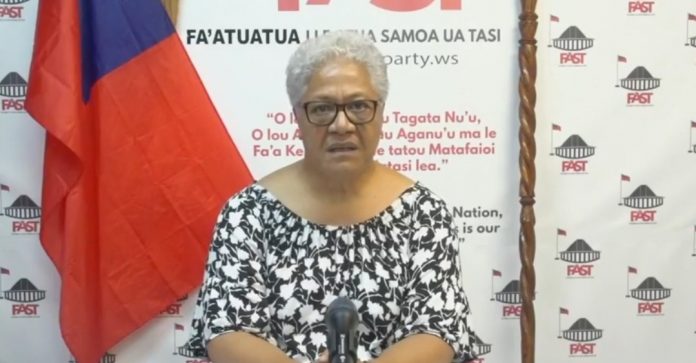 29 May 2021, Apia Samoa. Prime Minister Elect Hon Fiame Naomi Mataafa has issued a press release to clarify the process of transitioning to a new government, and calls on Caretaker Prime Minister Hon Tuilaepa Sailele Malielegaoi and his Cabinet, to step down honorably.

“I address these comments to Tuilaepa: your long legacy is an extraordinary one of great achievement and global milestones, for which this country is rightly grateful, however, the more disruptive and disrespectful you become, the more that unique legacy is diminished and tarnished, by your own words and your own deeds. Please think of our people and allow our Government to take the reins of power from you, peacefully, respectfully and honorably so we may make our own contributions to this land”.

Also broadcasted widely on social media platforms, Fiame says the change from the HRPP Government to the FAST Government needs planning and preparation and “does not happen quickly, especially when the party in power has been there for decades”.

Fiame confirms that she has written to Head of State Tuimalealiifano Sualauvi Vaaletoa II as well as to Tuilaepa and key government officials to prepare Ministries for the transition.

“Letters have been written to the Head of State, the ex-Prime Minister, the Chairman of the Public Service Commission, and other key officials requesting that they start work on preparing their ministries and corporations for the new Government, and for the
new Ministers who will lead them for the next five years”.

Fiame directs a strong message to the caretaker government, and alleges Tuilaepa is using bullying tactics towards heads of ministries and government corporations. The Prime Minister Elect gets personal, referring to caretaker Ministers as ‘expired’ and government CEO’s as ‘weak kneed’.

“In order to move into Government from the outside, we would normally need the close and generous co-operation of the outgoing Ministers, but sadly the ex-Prime Minister and his band of expired Ministers (some of whom are still shamelessly driving Government vehicles even after losing their seats), and the weak kneed CEO’s
who carry out his Orders, have tried to make things as difficult as possible including having multiple meetings this and last week of all CEO’s in order to scare them into line and stating, wrongly, that he remains the PM and they must be loyal to him”.

The Prime Minister Elect gives a glimpse of the changes to expect under a FAST government including amendments to ‘ridiculous’ State of Emergency Orders.  Fiame says plans are needed in order to ensure all government services are still delivered on time and efficiently by Ministries and Corporations, and sends a strong message to the public service..“which must be accountable to the people of Samoa, and not simply to a Minister or the CEO”.

“This Government intends to change what you have become used to, and aspire to what the public expects, and is going to review and consider all the policies, all the processes and all the things which frustrate ordinary people…like some of the more ridiculous
restrictions in the Emergency Orders, how they have impacted your family, your business and why they’re still in place”.

“It is my earnest prayer that the transition will be carried out quickly
and efficiently. We have already experienced how embarrassing and heart
breaking the actions of a few public office holders can be as the pictures of the Samoan Lockout (as its now known) were beamed around the world, but let’s not allow the same ‘ill will’ to poison the need to transition from the old to the new. My expectations of
the public service is to do your jobs to the best of your ability, and meet the needs of our people”.

Fiame says the charade of Police seen protecting Government offices and the Head of State’s residence must come to an end.

“It is time for the ex-PM to acknowledge that HRPP lost 26 seats at the general election;

“It is time for them to start their plans to move out of the roles and offices they occupy, and allow the public service to focus on the changes to come, in a businesslike and orderly way”.

“I am extremely concerned, that the 25 districts which you represent are currently unrepresented in our Parliament and would respectfully invite you to come in and speak with the Speaker of the House..so we may make the necessary arrangements to have you sworn in as members of Parliament, whether it is when Parliament reconvenes
(to start the Budget debates) or earlier before the Speaker at another time;

“Please don’t rely on a ceremony conducted in Parliament but devoid of any legality; such was the effect of the May 22nd Proclamation calling Parliament to convene on Monday 24th, not Mon 31st , or any other day….” says Fiame.

Fiame goes on to warn elected HRPP members that their seats could be declared vacant if they are not sworn in.

“Democracy demands that all the successful candidates proclaimed as Elected Members on 12 and 16 April under warrant by the Head of State, be sworn in, failing which Parliament could resolve to declare those seats vacant, sending you all back to by elections”.

“Please take this open invitation from a new administration, which is very mindful of the obligations which it has to act fairly and ensure the votes of all constituencies, regardless of whether they were won by FAST or HRPP, are honored”.

Addressing the public, Fiame acknowledges the difficulties that come with change, and asks for patience during the transition.

“Finally to the public, please continue to ‘keep the faith’ and also your patience, as we work through the move from the ‘old’ government to the ‘new’ one, with care and efficiency, deliberately and wisely, so that the shock of change is reduced for the workers and the public and our overseas partners, as much as possible”.

Fiame ends her address with a Proverb: “In all thy ways acknowledge Him, and He will direct thy paths’ Proverbs 3:6”