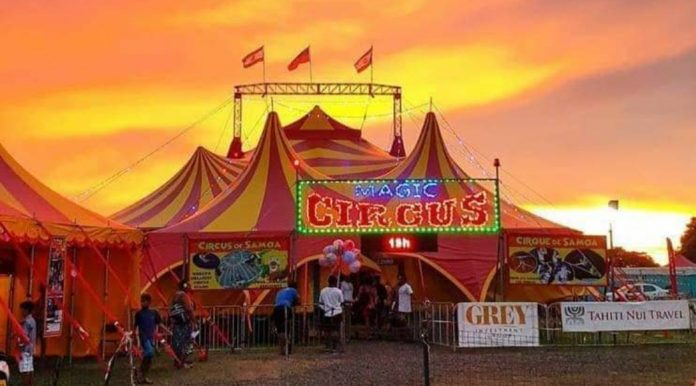 Fiafia Park at Tuanaimato will temporarily close its doors to the public after this weekend, as the Magic Circus of Samoa prepares to embark on a tour of Upolu and Savaii.

Tupa’i Bruno Loyale has confirmed that the Magic Circus would go on a road tour of Samoa, to give the opportunity for people in the rural areas to experience the show.

Ringmaster and the man behind the best live show in the Pacific says it would also give them a chance to close for extensions needed at Fiafia Park.

“The circus at Tafaigata will have the last show on Friday the 18th of September.. and the park’s last day is this Saturday the 19th.. and then around the 1st of October we will start to take the circus to all villages around Upolu and Savaii,” he said.

Tupa’i says the final day of Fiafia Park will see slashed prices for all rides, and the Magic Circus show will be offered at $6 tala for children under 12, and $12 tala for adults.

The Magic Circus of Samoa was established in the 1930s by Tupa’i Bruno’s father Alfonzo Royale and Tupa’i says he had taken over the circus at the age of 14 when his father passed away.

The show features motorcyclists in a “globe of death”, a trapeze and high wire artists, magicians, clowns, contortionists, balancing acts, juggling and acrobatics. Tupa’i has trained many young Samoans to perform for the Magic Circus, allowing them to earn an income for their families through the arts.