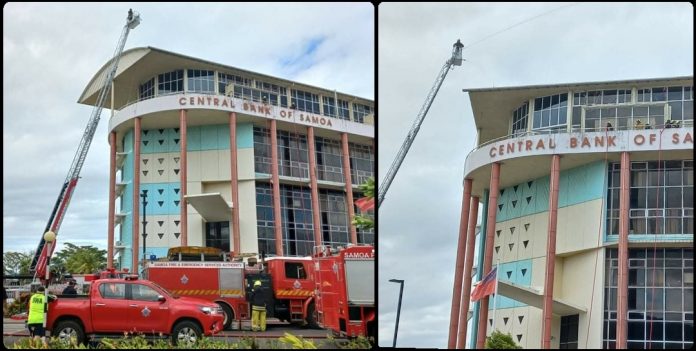 Workers inside the CBS building were made to evacuate as FESA fire fighters entered the building in a live fire drill. FESA responded in full gear, with an extension ladder and all other resources, to test response times in the event of a fire at CBS.

“This is another important part of FESA’s awareness and prevention program for all high rise buildings,” said Fire Commissioner Tanuvasa Petone Mauga in response to questions from Samoa Global News.

Tanuvasa says owners, managers and tenants of high rise buildings are taught about the importance of having an Emergency Response Plan that is documented and well known to all occupants.

“It’s really important to ensure that all occupants and our workers in high rise buildings including tenants understand who to call, what to do and where to go for safety when fire, or any other emergency happens,” said Tanuvasa.

The Fire Commissioner says drills such as the one they conducted for the CBS building on Friday allows them to test each agency’s Emergency Response Plan.

“Everyone in the CBS building had to respond as if there was a fire.. for example the Fire Wardens for each agency department and each floor are tested in their roles to account for their teams once they are outside..

“At the same time, FESA equipment and response times are tested”.

Tanuvasa said this is part of their ongoing service, to work closely with all agencies to ensure Samoa’s high rise buildings, and all buildings that are densely populated and frequented by the public have safety measures in place.