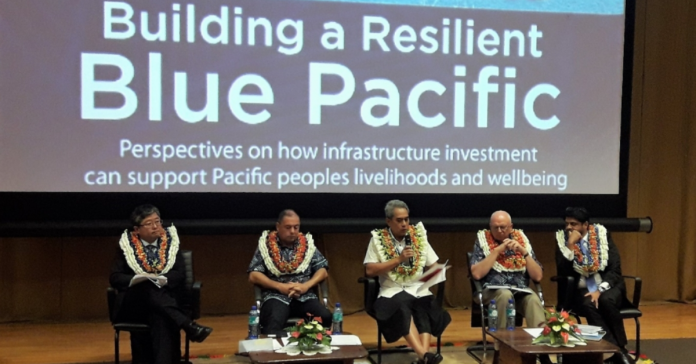 Greater collaboration between local government, regional bodies and the juggernauts of the global economy is needed to drive any serious and large-scale change for Pacific states seeking to build resilience against disaster.

That was the message delivered by decision-makers from the Cook Islands, Fiji and Samoa, who were joined by representatives from the ADB and Australian government at a public seminar on the second day of the Forum Economic Ministers Meeting (FEMM) in Suva.

“Climate Change for us is a huge issue. Coral bleaching, sea level rise, the incidents of more intense cyclones and weather events – none of these were caused by Pacific Island countries. But we’re the ones that are feeling the brunt of that. So for us, resilience building and adaptation is the biggest priority.

Carbon emissions from all of the Pacific Island countries represent less than one percent of the global total, “So even though we’re doing our bit, it won’t make any difference. It really makes a difference when large countries make the effort,” said Brown.

“We actually asked the World Bank to carry out a study for us. This is called the Climate Vulnerability Assessment or CVA…we recognised very earlier on in the PIFS that in order to be able to know exactly what we need to spend to build resilience, we need to measure our vulnerability.

He says the publication allows Fiji to approach donors and financiers and present better information.

“We can tell them ‘this is where we will be spending our money coupled with the national development plan – these are the specific targets that we do have.’ So this is very critical to do,” said Sayed-Khaiyum.

Clarifications were also made on how governments were ensuring resilience criteria were being reflected in tender and procurement processes, the lynchpin of infrastructure projects.
Deputy Prime Minister Brown said flexibility with tender criteria has allowed for domestic growth.
“Traditionally in Pacific Island countries, large infrastructure projects in particular would go out to international tenders and we would have an international company that comes in, does the work and leaves. We’ve found that the capabilities that have been developed over the last ten, fifteen years in our country, as we have had increased investment in infrastructure, has built capacity within country.

“For us, the tender process that goes out means we actively engage with ADB and with New Zealand to level the playing field to allow domestic companies to be competitive and put in competitive bids.”

He added it was important to engage local companies as they are familiar with local conditions and are best placed to commit to long-term management and maintenance efforts, a crucial part of resiliency measures.
Knowledge-transfer was supported by Sayed-Khaiyum.

“Sometimes international companies bring about a particular type of technology, a particular level of knowledge that does not exist.

“If you have a new technology, new methodology of building, then you need someone with know-how and then if you have subcontractors below that they actually then learn how to use that technology but the initial parameters and determination, the quality control is done by the company that is not necessarily domestic.”

Samoa’s Finance Minister, Afioga Sili Epa Tuioti, said it was important to engage communities in all resilience and adaptation conversations.
“One of the areas we have invested a lot in is community awareness, public consultations to inform on the consequences of climate change impacts. Working with matais and women’s committees in their villages. We include it in the curricula for schools.

“We are investing a lot in trying to ensure connectivity with the communities. We want to give them a reason to stay in their communities and not migrate to the town area.”

He said Samoa is also helping support small businesses in communities taking agricultural produce to market with concessional financing.
ADB’s Chief Economist, Yasuyuki Sawada said although Asia Pacific can be seen as the engine of global growth, contributing more than 60% to global progress, the Pacific has the greatest need for infrastructure due to susceptibility to disaster risk.

“The last two years, the whole Pacific region’s been on a wave of economic recovery, due to a number of disasters.”

Building resilient economies has been at the forefront of conversations at FEMM and gaps in available finance options were acknowledged.
“The topic of our discussions at the Finance Economic Ministers Meeting was looking at ways of building, of accessing financing to build resilience in our economies,” said Deputy Prime Minister Brown.

“For many years now Pacific Islands Finance Ministers have been at the forefront of calls for greater access, easier access, particularly to climate financing. We see that building resilience in basic infrastructure like ports and airports, the climate resilience component of that is significant. That gap that was pointed out. That’s what we need to build, to ensure that when we are hit by climate events we’ve built it to a level of resilience that can withstand or mitigate the cost of reconstruction and recovery,” he said.

The absence of suitable insurance cover and low rates of insurance in the Pacific region have also been identified as a major hurdle to sustainable and resilient development.

Fiji says a call for assistance from the largest economic powers is needed to encourage major insurance companies to truly engage with Pacific communities, and provide flexible options for cover.

Samoa’s Finance Minister said that while insurance is a fairly foreign concept for the Pacific, there’s a significant role insurance cover provides as a lifeline post-disaster.

“Government is now paying for the insurance for all primary schools in the country. We recently had a fire in one of the schools and government was able to work with the insurer to make sure funds were made available quickly to rebuild the school and have the students back in to class.”

He said Samoa’s economy took a hit of up to 40 percent after recent natural disasters and the nation is listed as debt-distressed by the World Bank, Asian Development Bank and other entities.
“But the only reason we incurred debt was to restore the necessary economic infrastructure for our people – water, roads, power and shelter.
“We had to invest in a new international airport as the old one was affected by cyclones. We had to go to the Chinese and the World Bank helped as well with the new runway.”

Sili said Samoa has taken on the challenge of reviewing tax systems – to the extent of legislating taxation of pastors of religion – to build a buffer in to the budget, for quick response time to a natural disaster.

He added that, similar to Fiji, control of climate financing in Samoa is expected to shift from the Ministry of Natural Resources and Environment to the Ministry of Finance, to allow a more holistic, whole-of-government approach to resiliency and mitigation.

A change in attitude to development partners is likely to yield greater outcomes for the Pacific, and according to Deputy Prime Minister Brown, the issue of debt-trap diplomacy is a fallacy.
“I think anybody who puts a bit of effort and does an academic study or a good sound financial study across the Pacific would see that the predominant lenders to Pacific Island countries are the multilateral banks, the World Bank, the Asian Development Bank and so forth.

“It’s not China. China is a borrower to the Pacific.
“I have to say though that China came at a time when traditional donors did not want to invest in the priorities that Pacific Islands wanted. At a time when our infrastructure was falling down, we needed money to put in to building these things up, our traditional donors were not available to help us in that field. China came to the party and we were able to get these things done. Maybe not to the best quality that we wanted –but a lot better than what we had before.” //