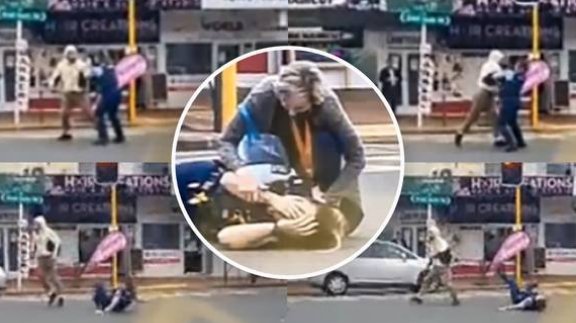 Tuesday 19 July 2022, Source: NZ Herald.  A female police officer was knocked unconscious in a vicious attack in a Manurewa street in Auckland, New Zealand.  The incident was caught on video by a shocked bystander, and it is being widely shared on social media.

Police confirmed a man, 27, had been arrested following the attack and is due to appear in Counties Manukau District Court today charged with intent to injure.

The man was tasered after fleeing from police on foot and assaulting the officer.

A police statement said the officer involved was knocked unconscious during the incident, and is now off work recovering. “She is being well supported by her colleagues..”

“We would like to thank the community who witnessed this incident for their support and assistance and we appreciate those who came to the aid of our officer.”

He said the video reveals to New Zealanders the “atrocious and unacceptable level of violence” police officers face on a daily basis.

“The violence is raw to witness and unfortunately assaults of this gravity are not rare, with more than two thousand assaults on officers last year alone,” Cahill said.

“Being assaulted is not ‘just part of the job’ of keeping communities safe, and the courts need to send a clear message to that effect. If police officers are not protected how are they supposed to protect New Zealanders?”

Cahill said the association will work with the police wellness team to support this officer.

The witness who filmed the video told the NZ Herald he was waiting at the traffic lights when he saw police chasing after the man who was “in an agitated state”.

As the officers surrounded the man on foot, he approached a female officer and punched her in the face.

She collapsed on the street clutching her face and was tended to by shocked members of the public.

The witness told the Herald she saw blood coming from her eyes and nose.

As the alleged attacker then tried to flee he was tasered by another officer.

However the Taser appeared to have little impact and he can be seen walking away with the barbs still lodged in his back.

In an April 2022 interview with NZ media, Minister of Police Hon Poto Williams announced a $45 million NZ dollar funding to go towards a new Tactical Response Model aimed at improving the safety of police officers.

Association President Chris Cahill says the number of police officers being assaulted on the job is increasing each year.  In 2017, 447 officers reported being assaulted. This grew to 620 in 2021.

“It’s ridiculous that a number of police officers are assaulted every day. They shouldn’t go to work with the expectation they’re going to be assaulted..

“They’re always going to deal with difficult situations. But these numbers are horrific,” Cahill said.

However, Cahill added that the numbers were actually much higher as many officers would never report being assaulted.