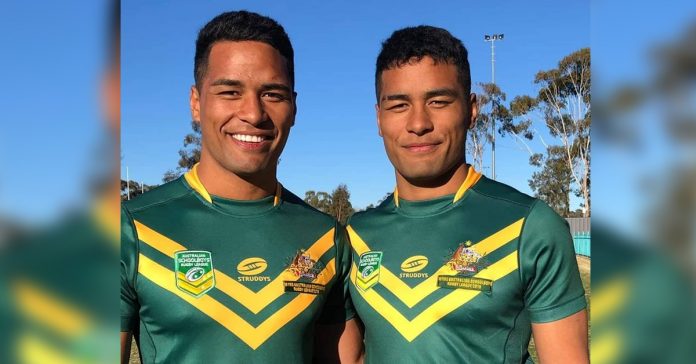 29 July 2019, Sydney Australia. Steelers U18 stars  Max and Matthew Feagai have made it into the Australian Schoolboys team of 2019.

The twins added another milestone to their budding careers when they lifted the SG Ball Trophy after a stellar year.

The twins descend from a family legacy of rugby greatness in Samoa.

As Samoan parents living abroad to seek better futures for their children, the doting parents have been the backbone support, driving the twins to trainings and games since their early childhood love for footy.

In the not too distant future the boys might just emulate the traits of their late grandfather and former Vaiala and Samoan international in the 1960’s Salele Feagaimaalii To’omalatai.

Dubbed at that time in Samoa as a human missile that flogged opponents in Samoa including Fiji and Tonga.

Their selection adds options to the side as utility players with both boys covering Centre, Wing and Fullback positions.

The Steelers have produced many Australian rugby league greats such as NRL coach Paul McGregor, Mark ‘Piggy’ Riddell and Dean Young to name a few.

The Toa Samoa pair Tim Lafai and Luciano Leilua who both play for the Dragons have been role models for Max and Matthew aspiring to one day soon make their NRL debut for the Saints.

Their father Fiapopo Feagai recalls, “ever since they were young I would finish work, have a beer then throw them the footy and watch the twins outplay each other in the backyard.”

Fiapopo Feagai says that from a young age his sons have always competed with each other, trying to outwit and outmuscle each other.

With the Morris twins nearing the twilight of their careers ,Australia may have just found another power twin combination in the making.