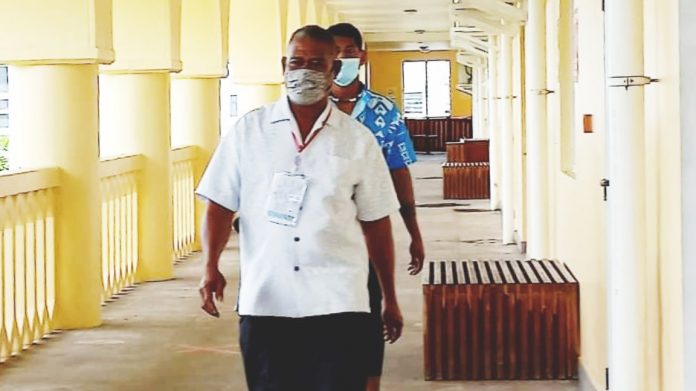 Monday 2 April 2022, Apia Samoa. A father whose 19-year-old son was killed in a tragic car crash at Lepale, Fasitoo-Uta on the 4th of March this year, stood in Court during criminal mentions this morning to ask the Court’s leniency upon his second boy, who had been driving on the day of the fatal accident.

At the time of the incident, Deputy Police Commissioner Auapaau Logoitino Filipo told SGN the older of the two siblings, who had been driving, was charged in relation to his brother’s death. He said the boys were at Fasitoo-Uta for their grandfather’s funeral, and the accident occurred on the day of the burial. The car, believed to have been speeding had collided with a tree. A cousin was also in the vehicle with them.

The boys’ father from Fasitoo-Uta raised his hand up in Court before Justice Niava Mata Tuatagaloa this morning, asking for a chance to address the Court. His son, Aniseko Taofinuu, unrepresented, had just pleaded guilty to one count of negligent driving causing death, and one count of driving without a license.

In Court today, the boys’ father, with a cracked voice and holding back tears, pleaded with Justice Tuatagaloa. “The young man who is before the Court this morning is my son. The young man who has died, is also my son,” said the father.

“My son is now staying with my brother who is a pastor at Vailele.. He is continuing school over the internet over there.. but please, we have lost one son already, and we ask for leniency for our son facing charges here today..”

The father then asked for a variation on the bail conditions, to allow Aniseko to visit them at Fasitoo-Uta from time to time. He said living at Vailele with his faifeau brother was good for his son, but they missed him, and wanted him to be able to visit.

Justice Niava granted the bail variation requested by the defendant’s father. Justice Tuatagaloa responded and told the father that it was good to hear his son is continuing with school online.. and said he was now free to visit. Justice Tuatagaloa requested a full report from probation be received before Aniseko’s sentencing date, set for next month in June.