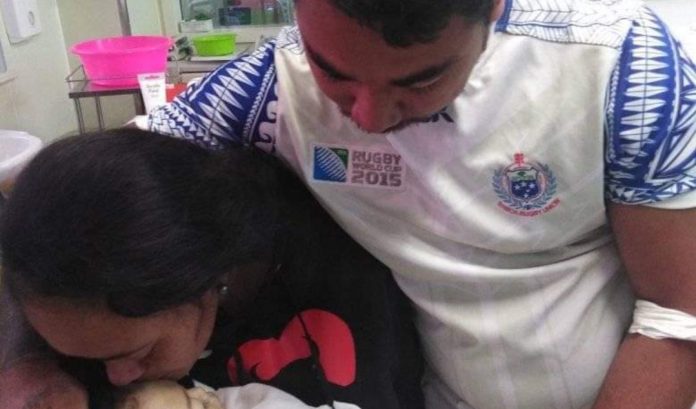 The devastated parents of a baby boy who lost his battle to the measles over the New Year holidays  say it was difficult to hear that nothing else could be done when they had taken their son to the hospital four times before he was finally admitted on their fifth visit.

Three month old Salvation Hicks was finally admitted to Motootua hospital on the 23rd of December 2019.  His parents spent Christmas watching Salvation fight for his life but on the 2nd of January as people celebrated the New Year, Salvation lost his battle to the measles.

Tupu and Lisa Hicks said they had first taken their baby boy to be checked on Sunday 15th December 2019. He was seen by a doctor at Tupua Tamasese Meaole (TTM) national hospital at Motootua.

Baby Salvation was then sent home with a prescription to treat his fever. Lisa Hicks says they took her son back a few days later on Thursday 19th December, and she remembers being consulted by the same doctor.

“We took my baby back on Thursday of that same week, the doctor who had checked him on Sunday also saw him on Thursday, but we were again given medicine” says Mrs Hicks.

With four older children, the couple from Salelologa and Fagaee were familiar with symptoms of common infant illnesses such as the flu and being feverish from teething. Knowing something was not right, they took their baby boy back to the hospital.

Living with their children at Matautu near Apia, Mr and Mrs Hicks say they took their son back to the hospital on Saturday 21st December but were turned away again.

The very next day on Sunday 22nd December, they took their son back to the hospital again! The grieving parents told Samoa Global News they were again sent home on that Sunday, for the fourth time within a period of seven days.

Mrs Hicks explains that on those last few check-ups the doctor had told them the visible rash on Salvation was evident of the measles now ‘coming out’ of baby’s system.

This is a common notion often heard being used in Samoa to describe an illness that was on the road to recovery, or a fever that had broken, “ua sasao mai fafo”.

Mr and Mrs Hicks say they were told on visit number three and visit number four that because there was a visible rash, admission to the hospital would essentially be pointless and they should just make sure they were diligent with giving baby his medicine, because the measles had come out, so to speak.

Salvation then fought an uphill battle against the measles and pneumonia from Monday 23rd December, his parents by his side at ICU through Christmas Day and New Years Day, until he took his last breath on Thursday 2nd January 2020.

Baby Salvation’s 28-year-old father, Tupu Hicks told the Samoa media that it was difficult to accept what had happened to their son.

“It is hard to forget the suffering our baby endured and if I think about the many times we brought him to the hospital”.

“The doctor said, if he had been admitted earlier it would not have escalated to ICU.”

Salvation’s parents will be taking him to Savaii next week to be laid to rest at Fagaee.

Samoa Global News sought a comment from the Minsitry of Health through the Government Secretariat on Wednesday 8th January 2020.

“Have forwarded your inquiry to Director General Leausa.”

Last November, Nuu Faailo Lameko had taken her then 11-month-old baby girl to the TTM Motootua National hospital three times before they were admitted to ICU on their fourth visit on Friday 15th November 2019.

Nuu told Samoa Global News at the time that she didn’t want to blame anyone but did wish her baby girl had been admitted earlier.

“I took her in as soon as she had a fever and coughing. I started taking her in on Monday 11th, they gave prescriptions for panadol and amoxillan;

“I took Mina back on Wednesay 13th and they gave us the same medication”.

“On Thursday I took her in again and we were given a different medication on that day, still panadols but this time augmentin was prescribed.”

Baby Lemina was finally admitted on Friday the 15th of November when Nuu was then told that the right side of her baby’s chest had contracted pneumonia.

“From our visits on Monday, Wednesday and Thursday they still prescribed medication and let us go home but on Friday when we went back showing them rashes, the doctor said she’s gonna have an x-ray and then said she’s gonna be admitted because she has severe pneumonia.”

In her pain Nuu had said at the time that she did not want to lay blame and was thankful to the hard working health care workers at Motootua.

“It’s not like I’m blaming anyone it’s just that I wish the doctor told me straight away, and I’m so envious of parents who say that they took their babies in and got admitted early;

“I take my hat off to the hard and tiring work of our doctors and nurses I’ve seen it up close.

Today Nuu said she is saddened to hear about Salvation, “I’m so shocked right now and crying, I was hoping sharing my story was gonna help and be taught as a lesson for the doctors.”