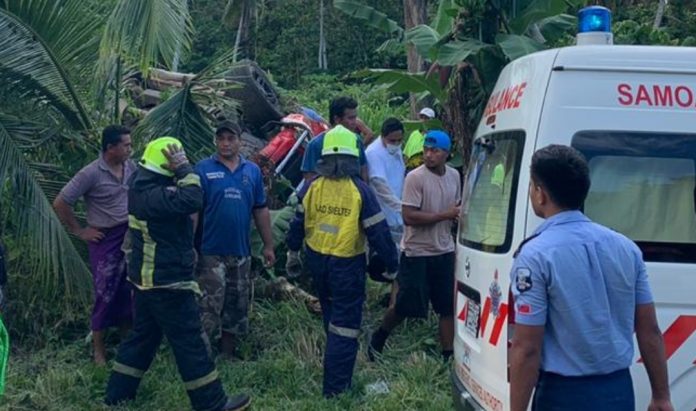 The Fire and Emergency Services as well as the Samoa Police responded to a fatal car accident which has claimed the life of a passenger and left 3 more with serious injuries at Motootua hospital.

Captain Christian Tooala who had driven past the scene soon after the accident told Samoa Global News that one of the passengers, a young man, died at the scene while the other three looked to have sustained serious injuries.

The Fire and Emergency Services Authority said they attended to the injured who had been passengers in a red Ford Ranger pick up truck.

Police Commissioner Su’a Fuiavailiili Egon Keil says, “Preliminary information is that two racing vehicles lost control resulting in the death of a passenger in one of the cars,”

“Drivers and passengers of both vehicles were transported to hospital for treatment,” added Su’a.

Liaina Anamaria Lei’a who lives nearby the crash site said there were four people in the red Ford Ranger while the driver of the white Toyota was alone.

“The people in the red pick up didn’t look so good.”

She said the exact place of the accident was just below the long uphill drive at Leili just inland from Leulumoega. 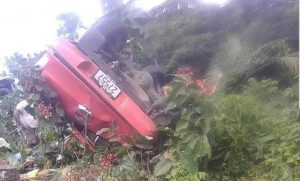 Ms Lei’a told Samoa Global News that they saw two vehicles racing, before both took a swerve off the road.

Ms Lei’a went on to say that the owner of the white Toyota Hilux was the Mayor of Leulumoega Ogo Talosaga Faatagi. She added that he was travelling alone and miraculously escaped serious injury.

This is the second motor vehicle accident in Samoa within a matter of days that has resulted in the loss of life. Social media continues to be flooded with posts of tribute and remembrance for a young father and rugby player who had died following a car crash at Vailoa less than two days ago.

If you are near or at the scene of an accident please use your mobile device to call 911 first, before you start to film or livestream the event.