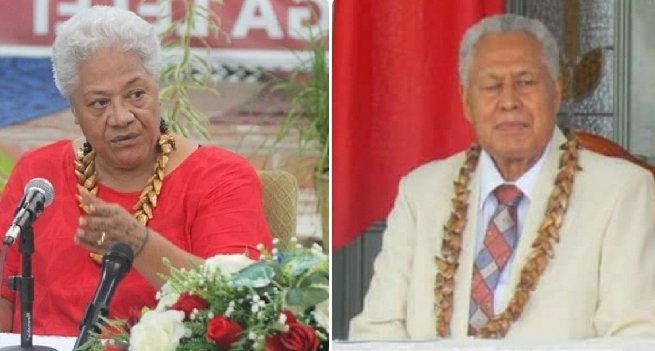 Hon Fiame Naomi Mataafa has the numbers to form a new government and become Samoa’s first woman Prime Minister; and is calling for Parliament to convene as soon as possible.

In two historical decisions delivered Monday afternoon, the Supreme Court of Samoa declared an attempt to appoint an additional HRPP Member of Parliament as unconstitutional, and a writ issued by the Head of State to revoke Samoa’s 9th April election results, as unlawful. Jointly considered, the two decisions essentially took the nation back to the FAST party majority of 26 members over HRPP’s 25 after Independent Tuala Iosefo Ponifasio chose to join FAST.

Fiame told the media they were following due process to confirm FAST has the majority needed to form a government.

A delegation of senior members of the Faatuatua i Le Atua Samoa ua Tasi party met with the Head of State, eager to ensure Parliament convenes as required by the Constitution, within 45 days of a generalelection.

Talamua Online reports the meeting was held Tuesday afternoon, where the Head of State was handed a letter confirming 26 elected FAST members out of the 51 Members of Parliament; enough to form a Government.

The list is said to have also indicated the names of a Speaker and Deputy Speaker whom FAST intends to nominate once Parliament convenes.

The FAST party delegation also met with the Clerk of the Legislative Assembly Tiatia Graeme Tualaulelei and he, too, was handed the same letter.

Addressing the nation on Monday night, Fiame said the law, as pronounced by the Supreme Court, should now be followed and Parliament ought to convene immediately.

“FAST will now invite the Clerk of Parliament to make the arrangements to convene the first session of Parliament after the conduct of the General Elections on 9 April and the warrants of election which declared 51 Members of Parliament you wish to lead this country for the next 5 years under my leadership as Prime Minister elect”, said Fiame in a live broadcast.

In its ruling handed down Monday afternoon, the Supreme Court of Samoa had made note of the Head of State’s constitutional obligation to convene Parliament within 45 days of a general election – which is next Monday 24th May.

“The Head of State’s attention is directed to the requirements of Article 52, and the Head of States obligation under the Constitution to call a meeting of the Legislative Assembly within 45 days of the holding of a General Election”, reads the Supreme Court decision.

Caretaker Prime Minister and leader of HRPP since 1998, Hon Tuilaepa Dr Sailele Malielegaoi in his own public address on Monday night said Parliament could not convene until the 75 election related Court matters were heard and decided.
According to Tuilaepa, the April 9th General Election results stood at HRPP 25, FAST 24, Independents 2; referring to Hon Fiame Naomi Mataafa and Tuala Iosefo Ponifasio as the Independents.
In what seems like a never-ending saga, the Registrar of the Supreme Court Moliei Simi Vaai has confirmed an application for Stay of Proceedings has been filed with the Supreme Court in relation to an appeal against one of the judgement against the additional Member of Parliament.
The Court has given the matter highest priority with the substantive hearing tomorrow Thursday 20th May and the decision expected to be delivered Friday 21st May 2021.