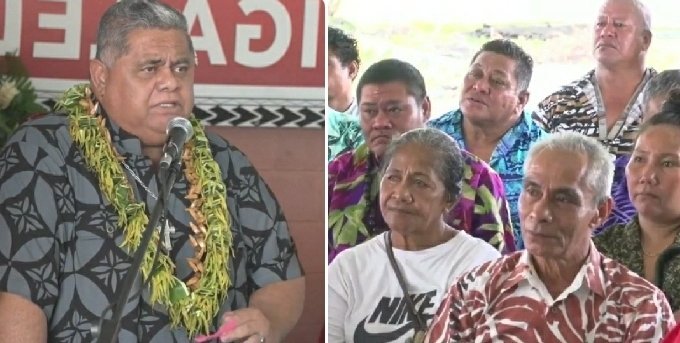 During the opening benediction Matavai EFKS church minister Laititi Vaega preached from the Book of James 4:13-15:

13 Now listen, you who say, “Today or tomorrow we will go to this or that city, spend a year there, carry on business and make money.” 14 Why, you do not even know what will happen tomorrow. What is your life? You are a mist that appears for a little while and then vanishes. 15 Instead, you ought to say, “If it is the Lord’s will, we will live and do this or that. 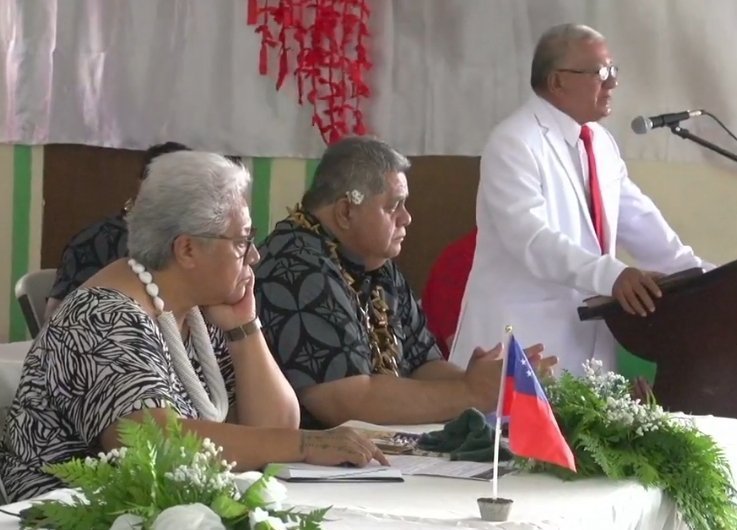 The faifeau spoke about “times of change” and the persecution of the people of Israel.

Reverand Vaega said poverty-stricken people were persecuted not by outsiders, but by the nation’s leaders as well as the rich and powerful. He said people’s lands had been taken, and they were made to return and work on their own lands, underpaid by the wealthy. 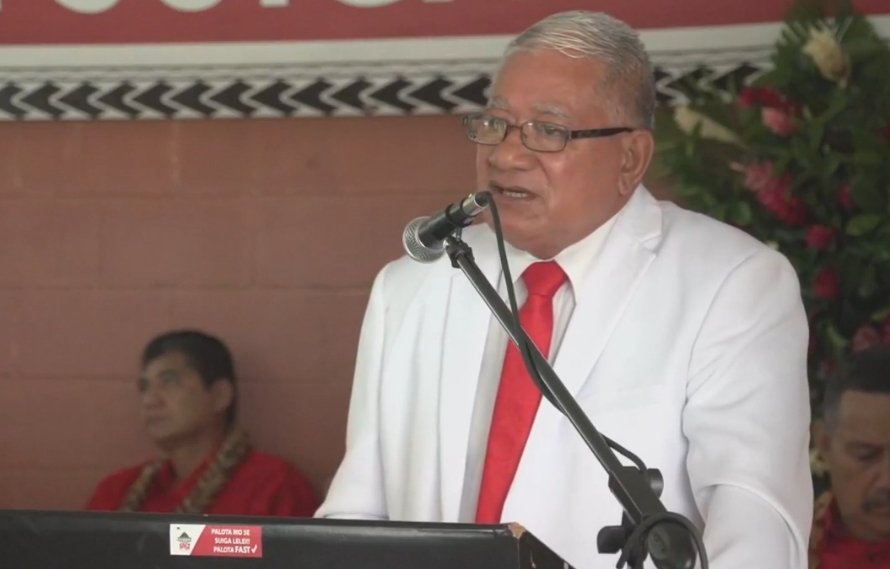 He said the leadership at the time was communist and Hitler-like.. faa-hikilā.

“We can all see the words of the banner behind me, vote for change..” he said.

Reverand Vaega said people no longer had a voice, even clergymen were silenced at times. But it was God’s will for people to live in peace and free from persecution.

“But when God wants a change in leadership, it will come to pass..

“That’s why we thank FAST for these rallies to raise awareness..because it is good to understand.. and wait on the Lord.

“Your vote is your choice, but you must know to look into what is happening.. if you don’t want these things to happen, then change your vote..”

“So we can prepare for positive changes .. brought about by FAST,” continued Reverand Vaega.

FAST Leader Laaulialemalietoa Leuatea Polataivao Schmidt spoke at length about the historical events that led to Samoa gaining Independence, reading out the names of those from the Gagaifomauga district who signed the declaration of Independence.

He stressed the importance of people having a say in governance decisions and said that was one of the main objectives of FAST roadshows.

“The development of Samoa is not being funded by Government monies, but by the hands and work of the people, so we are here to ask of the people…” 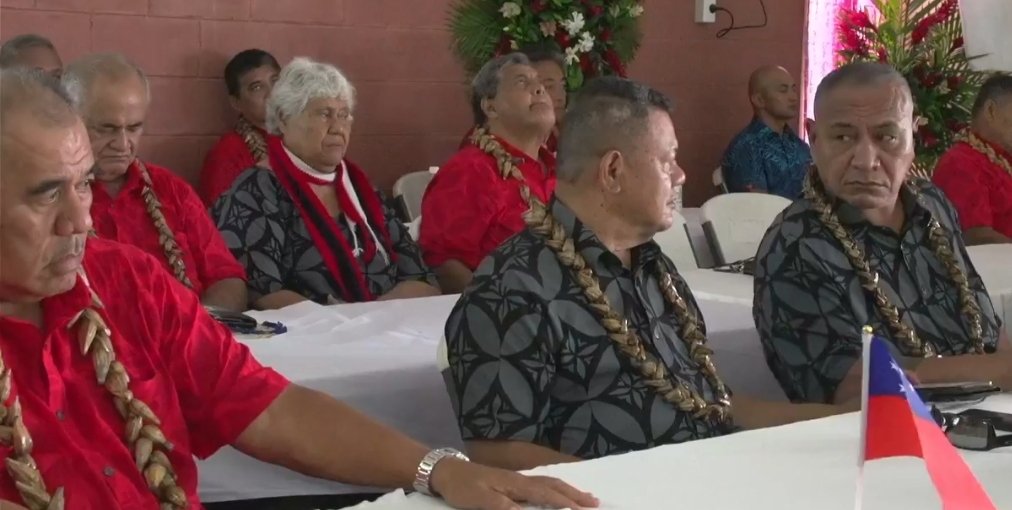 “Fiame has served in Government for over 40 years, her forefathers having been Samoa’s first leaders… and Olo Fiti Vaai has fought the lone battle of opposition in Parliament for over 20 years..”, said Laauli.

Laauli spoke about changes to the Eelctoral Act that led him to leave HRPP, where he and Olo Fiti were the only two MPs to vote against the amendment to shift constituency boundaries which he says, adversely affects the structure of the puleono. 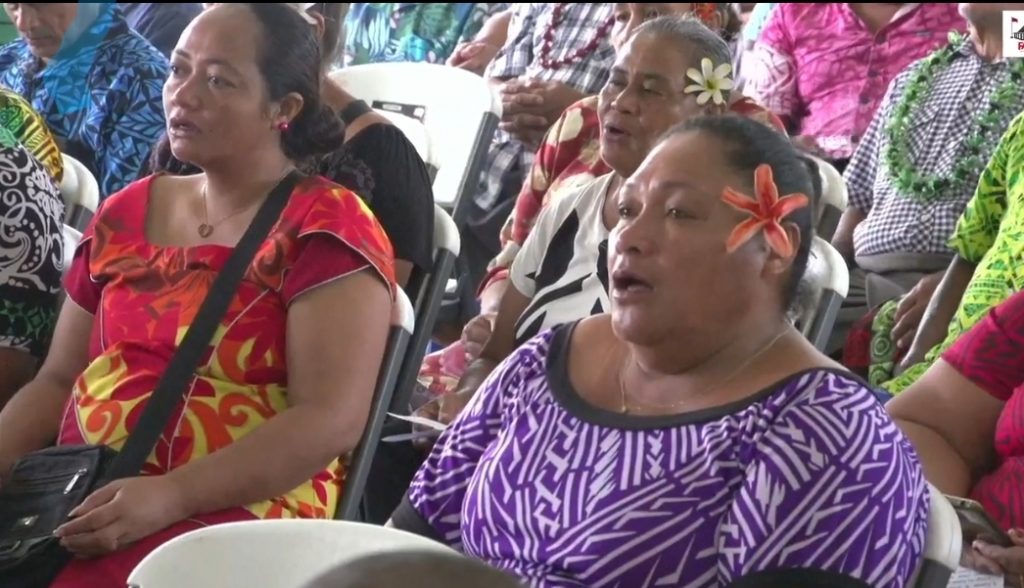 Laauli’s reiterated his stance that Savaii voters living and working in Upolu should be given the option to not have to travel to the Big Island.

Laauli said there us a substantial cost to voters to abide by the rule that requires them to travel to Savaii to vote..

“Not less than $50,000 tala was spent by constituents during my recent bielection..”

The rule that states all voters must return to the Constituent to cast their vote had come about after villagers complained that those living outside the village were having too much influence over general election results.

Laauli also mentioned the abuse toward them as well as Fiame, referring to the nick-names now being used to describe them.  In his weekly programmes, Prime Minister Tuilaepa is heard jokingly referring to the opposition MPs as Ro, Ra and Re.

As in other rallies, FAST then played a video to introduce all its candidates for the upcoming elections, and gave the floor across to those present for airing of public views.

Those attending were taken through a detailed reading of the FAST manifesto, proposed policies and positions.

There was also a launch of free wifi installed in the compound of the EFKS Church, for the use of all youth within the village.