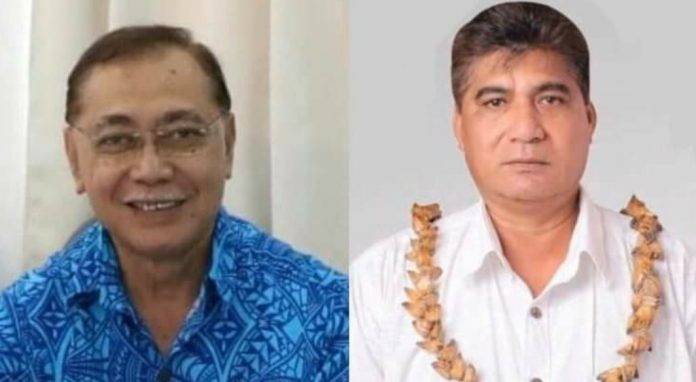 The Faleata 1 official final count continued at Tuanaimato at press time, with scrutineers and officials counting votes from each booth, and taking time to consider all informal votes.

Before the Special Votes count even coming to an end, there was already much misinformation about the result circulating on social media. Some had even reported that Faleata 1 had swung to Dr Ah Ching of HRPP.  Samoa Global News, however, were at Tuanaimato during the count.

FAST maintains the seat and the 25-25 draw from the weekend’s preliminary results.

Another Constituency where a swing from one party to the other is numerically possible, is that of Salega 1, where Fepuleai Faasavalu Faimata Sua of FAST is currently the unofficial winner – however, he has HRPP’s Toomata Aki Tuipea only 13 votes behind, and Tautua Samoa’s Afualo Dr Wood Uti Salele trailing by 15 votes. There are 40 Special Votes yet to be counted for Salega 1.

All Vaimauga and Faleata constituencies have now completed Special Vote counts with no change to preliminary results.

The schedule of Final Count including special votes, can be found on the OEC Facebook page.

Special votes are those that were placed into the smaller ballot boxes from each polling booth. Officials such as OEC staff, police and those working at each booth had cast their votes where they were stationed.

Special votes also include mobile booths which received ballots from special locations such as Mapuifagalele, Carmelite Sisters and the SVSG Campus of Hope. There were also mobile booths for similar locations in Savaii.

Notice from OEC – Understanding the Process

We understand people are curious as to why the process is slow, so to shed some light on this process:

1️⃣  Before the ballots are counted, OEC officials and scrutineers go through the painstaking task of checking the “Marked Booth Rolls” against a “Master Roll”. This process officially began today.

2️⃣  Why is this done? To reconcile number of voters so that there are no extra or missing ballots.

3️⃣  This means that only the votes of people who legitimately turned up to vote will be counted, and ONLY counted once. For example, you cannot enrol in different constituencies and vote twice.

4️⃣  Once this process is done, we then move on to the thorough process of counting the votes.

5️⃣  OEC Officials open up each individual ballot infront of Police and Scrutineers (who are nominated by each candidate) and we all collectively count — and there are thousands of ballots to go through. It is as tedious as it sounds.

6️⃣  The process, while slow, ensures both transparency and accuracy. It also ensures that not only your vote counts, you can have full confidence in the results of the election.

🙏🏾 Thank you again for your support and ask for your patience as we continue the work.🇼🇸