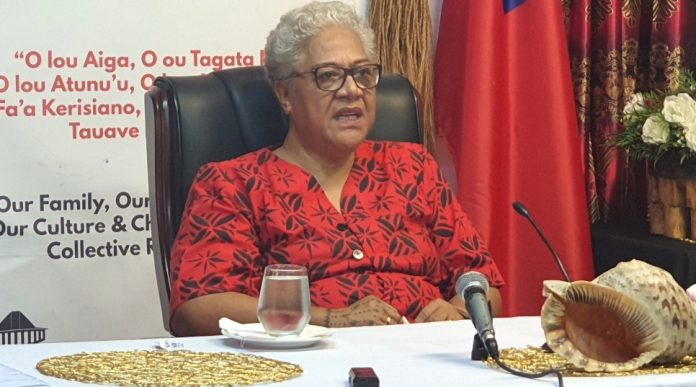 Caretaker government move to dismantle the Judiciary and Constitution

“There have been disturbing developments over the last few days that I and the FAST Party consider and interpret as a direct attack on the Rule of Law intended to dismantle our country’s Constitution and prevent the Judiciary from undertaking its role of interpreting the law and keeping the Caretaker Government accountable.

The HRPP have through their Secretary and former Associate Minister made unfounded accusations against the Judiciary stating that the Chief Justice is incompetent, without any form of proper factual evidence and then using such outrageous and politically motivated allegations as an excuse to use the Judicial Services Committee ‘JSC’ to suspend or remove the Chief Justice and any other Supreme Court Justices they wish.

Over the past three almost four months we have seen the unconscionable and dirty tactics played out by a Man who refuses to accept defeat and now in the last desperate attempt to retain power, we have their attack on the Rule of Law, I can say unequivocably that contrary to HRPP’s lies and mistruths,  neither I nor La’auli nor any member of FAST has met with the Chief Justice or any other Supreme Court Judge,  in secret or in private.

Let me further correct that lie and say this…unlike Tuilaepa who has personally visited the Court Complex at Mulinu’u attempting to speak to at least three sitting Supreme Court Judges (before the 17 May cases were decided), accompanied by others, and who has also sent his former MP’s to attempt to visit Judges in their private homes, to speak with them prior to Court hearings, we have not sought to undermine the Independence of the Judiciary in such a inappropriate manner.

No such meetings ever took place. This type of misinformation is absolutely consistent with the recent slurs on the reputation of La’auli, which we now find was a complete lie motivated by malice and assisted by the failure by journalists to independently check their facts…and seek and honour the truth.

HRPP further accuses the Judiciary of bias in their court rulings in the election petitions brought by FAST candidates and other matters because….they have been unsuccessful in their Court cases…a word in cases they have ‘lost’..   Is this the attitude and behaviour of people you wish to lead you?

As with court systems in all functioning democracies, the findings and subsequent decisions by the courts are based on evidence and legal principles. Where the Courts have ruled in favour of FAST cases, are based on the merits of legal principles and evidence provided, and not any bias on the part of the court.

The evidence and legal principles advanced by FAST in their cases reflect the depth of hard work and research put in by the Party and their legal team.

It is concerning that the caretaker is now seeking to suspend or remove the Honourable Chief Justice whilst the sitting of the Court of Appeal is pending this Friday 17 July on highly important matters such as the legality of the swearing in of FAST members on 24 May and the proclamation by Head of State to convene Parliament of 20 May and the legitimate party to form and lead the Government of Samoa.

This case follows efforts by Tuilaepa, the caretaker government and HRPP Party to advise the making of unlawful proclamations by the Head of State three of which the Court has already ruled as unlawful.

The attack on the Chief Justice is not only an attack on the Judiciary and Samoa’s court system, but also a direct attack on the Samoa’s Constitution and the laws which protect, guide and allow us to live together in peace. In short it is a direct assault on the Rule of Law as it operates in Samoa. Remove the law and the Courts and we are left with no protection from a Dictator and his tyranny, where one man decides how we live, and how we die.

The caretaker government continues to cling on to power as the country is under the Covid-19 pandemic State of Emergency and have already used unconstitutional proclamations by the Head of State to retain power and continue to rule the country.

Under the Constitution, the judiciary is the only legal body and the authority and power to interpret and render final pronouncements on the Constitution and the law in Samoa.

Tuilaepa and HRPP supporters and their advisers in their media releases, have stated that the Head of State is above the law and possesses powers to direct everything and everyone,  including the Police, in a manner which is not authorised by the Constitution and the only protection which you and I have is through our country’s Courts.

On 9 April, our people expressed their will through their votes.

It is going on to four months now and Tuilaepa and the caretaker government and HRPP in their behaviour, continue to disregard the will of the people expressed through the general elections. They have instead blamed FAST and the Judiciary for their loss.

The Constitution, founded by our forefathers almost 60 years ago, has never presented us with the magnitude of these problems because of the problems created by Tuilaepa have been created because of his refusal to follow accepted conventions including the one that requires the loser of an election to leave office once the results are confirmed and where his party do not have the majority of votes in Parliament..

Under these challenging times, I and the FAST Party proclaim our continuing support of the rule of law and our Judiciary as the last bastion and our nations last hope  to defend and restore our democracy, our freedom and our country’s dignity.

It is all clear now that the intent and design behind the 3 controversial bills rushed through and passed by parliament last year were to weaken the role of the Chief Justice and the Courts to allow Tuilaepa to have his way in all things.

Parliament has been prevented from sitting, and the Judiciary is the remaining and standing pillar left of our democracy that holds our last hope to defend our democracy.

Tuilaepa and the caretaker government is now moving to take full control of the Judiciary using unfounded claims so they can suspend the Chief Justice and give notice to the judiciary.

These are the red flags and warning signs taken from a Tyrants playbook, as he attempts to move us to a dictatorship and the absolute rule by one.

As the country continues under the pandemic State of Emergency, it is my earnest and constant prayer that we all remain calm so as not to provide an excuse for the further abuse of Emergency Orders and unnecessary restrictions on trade and personal liberties by the caretaker government. But for us all to continue to protect, defend and uphold the rule of law and the democratic principles that have steered our nation well over the last 59 years as an independent country, and await the final decisions in matters which will define us for the next five years.

May God continue to watch over Samoa and light her paths. Amen