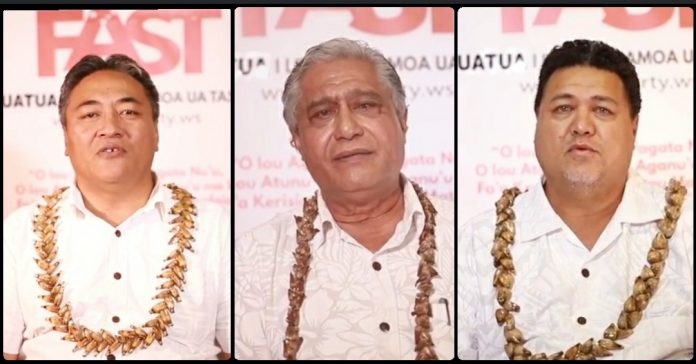 The Faatuatua i Le Atua Samoa ua Tasi (FAST) have endorsed three candidates who stepped forward wanting to run under the newly established party’s ticket for the Sagaga 2 by-election.

In an interview with Samoa Global News last week, FAST Chairman Laaulialemalietoa Leuatea Polataivao Schmidt said negotiations were still underway in efforts to try and reduce the number of candidates for FAST, who have never before fielded 3 candidates for one constituency.

The three FAST candidates will join two announced by the Human Rights Protection Party, to make five strong candidates for voters of Sagaga 2 to select their representative from.

Fata Meafou secured 342 votes more votes than Faalogo, whose village of Malie had backed the two HRPP candidates who placed first and second.

With Seiuli Ueligitone Seiuli and Maualaivao Patelesio Ah Him ineligible for the by-election, Faalogo is confident he has the backing of his village of Malie.

One of the Human Rights Protection Party candidates, however, is Faamausili Siona who is the Sui o le Nuu (SN) or Village Representative for Malie. Faamausili has resigned from his position as SN to prepare for the upcoming by-election.

The third candidate for FAST is former Manu Samoa Manager Fata Ryan Schuster. Fata Ryan has said that he, too, has many affiliations including family ties with Malie and is confident of his campaign preparations.

Fata Ryan did also put his hand up for the April 9 general election but was deemed ineligible over a technical issue with the registration of his matai.

All three FAST candidates have prepared party endorsed campaign messages calling for the support of the constituency.

The by-election has been called for Friday 26 November 2021.