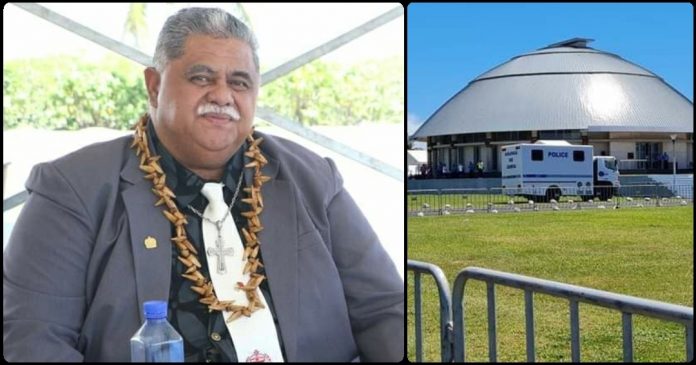 The Chairman of the Fa’atuatua i le Atua Samoa ua Tasi (FAST) political party, La’aulialemalietoa Leuatea Polataivao Schmidt believes that the only solution going forward for HRPP’s elected members is to seek a motion from the Court to determine the legality of their status as Members of Parliament.

HRPP have been banned from Parliament grounds for the past three days as the Legislative Assembly sits for the first time since the April 9th general elections. The situation reached new heights on Wednesday when members of the clergy became involved, with one faifeau kneeling before Police outside Parliament to prevent arrests of HRPP party members, and the Archbishop of the Catholic Church performing a traditional ifoga on the malae infront of the Government Building at the Eleele Fou.

Responding to Samoa Global News on a solution and possible way forward for the ongoing impasse, La’auli says it is the Rule of Law that they uphold. It is his view that the Speaker is acting within his prerogative, and cannot swear in the members of HRPP because the law does not set out a firm legal mandate for the swearing in of members after the 45 day period has transpired.

“The Law is silent to what happens when the 45 days expires,” said Laauli who was also a former Speaker of the House.

“That is why we were so determined to be sworn in on that 45th day”.

Laaulialemalietoa said the Court is the only place for a firm solution and interpretation of the Law and HRPP should have sought clarification by now.

“It is something they should have done just like what we did when we were fighting for our rights as elected Members of Parliament,” La’auli said.

As it turns out, the Supreme Court this morning heard an urgent motion from the Human Rights Protection Party (HRPP)seeking an order that would allow the swearing-in of its elected members, so that they may exercise the right to represent their respective constituencies in Parliament.

Asked about His Grace the Archbishop performing a ifoga, and Reverand Bismark Eti Tamati kneeling at Mulinu’u, as well as the National Council of Churches intervening to call for an end to the political crisis, La’auli said it was all planned by the leader of HRPP and it’s members.

“The leader of that side has repeatedly called on Church and Church Ministers to intervene in the past week, threatening violence and civil unrest if they do not respond;

“The Servants of God have been dragged into this, which is just not right,” he added.

“The Archbishop shouldn’t be presenting the “ifoga” because there is nothing going on between him and the government,” La’auli stated.

Prime Minister Fiame Naomi Mataafa and the Speaker of the House met with Head of State Tuimalealiifano Sualauvi II, and Council of Deputy Member Le Mamea Ropati Mualia a the Vailele residence which also houses their offices.

In a live broadcast on Wednesday afternoon from outside the HOS residence, PM Fiame said they had gone out to see if the Head of Stead needed anything, as he had come to Parliament earlier in the day.

“We are concerned about the Head of State and the Council of Deputies, as we heard that they had both come down to Parliament grounds this morning..

“His Highness stated that he was worried when he saw that there was tension between the Police and the HRPP party, and decided to assist,” Fiame said.

On the way forward, Fiame said she assured the Head of State that the position of the government was to maintain the rule of law, and that is also the position taken by the Speaker of the House.

“On the issue of whether or not to swear in members of HRPP, there are reasons behind the decision of the Speaker as explained in letters exchanged.”

She assured the Head of State that the situation was only politics between political parties, and the relations between them should be left to them to solve.