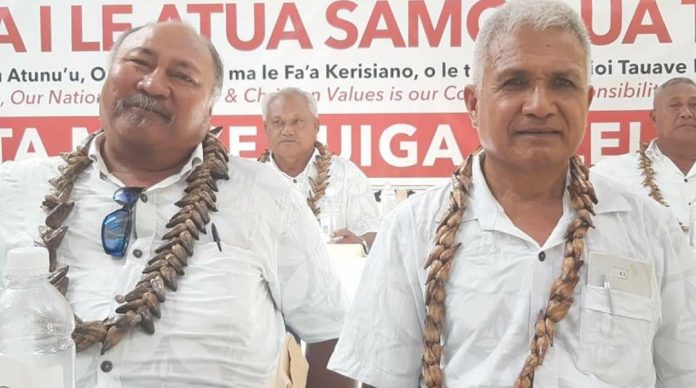 The Faatuatua i Le Atua Samoa ua Tasi (FAST) political party has been asked by voters of the Vaa-o-Fonoti constituency in the district of Fagaloa, to field one candidate for the upcoming general elections.

Fata Lauaano Leausa was the first speaker to stand during the Q&A session of the election campaign rally that saw voters packed into the Taelefaga EFKS church hall on Saturday morning.

“My first comment is advice to Logo and Fauoo… because it would be better to have one candidate that all of us here can throw our support behind..”

The voter publicly declared his support for FAST during his lengthy intervention, advising that two candidates would split the votes.

In response FAST leader Laaulialemalietoa Leuatea Polataivao Schmidt thanked Fata for the advice and said the decision would lie with the two candidates.

“Thank you for looking to what is best for the party, if that is the voters request it will be taken on board and considered by Logo and Fauoo..”

Fata went on to request a district hospital for Fagaloa, suggesting the one at Musumusu be revived.

“There is no hospital for our district and our people have to travel to Anoamaa, failing that, it is Lalomanu, or we have to take the trip to Apia..”

Another man who identified himself as Magele from Musumusu and Faleola from Saletele stood to raise the issue of roads saying there is a dire need to enlarge the cliff-side roads in the district.

He also raised the issue of affordability of tertiary education. According to Magele, many students in the district who had qualified for University have dropped out because parents are unable to afford tuition fees.

“These students from Fagaloa may have become lawyers, or even judges, but they have had to drop out…”, he said.

Magele raised the issue of transparency and accountability, and also asked about the $1 million tala outlined in the FAST manifesto as being an annual budget allocation for community development, handed out to each electoral constituency.

“Is that fund for the district or would it be allocated to each village within the district?..For example there are 9 villages for Vaa-o-Fonoti, and yet, for other constituencies, there are only one or two…”

Laaulialemalietoa reiterated that the $1 million per constituency per year, is not to be given out as a grant but rather, an allocation for development needs.

Another man who identified himself as Lavasii from Musumusu and Logoimauga from Lona stood to state his allegiance to FAST, saying their Council of Chiefs are leaving the decision to voters’ individual right to choose, but he has already decided.

“As for me and my Lavasii, I will serve FAST..”

FAST party leader Laaulialemalietoa told voters that whatever the result FAST will return to engage again with communities.