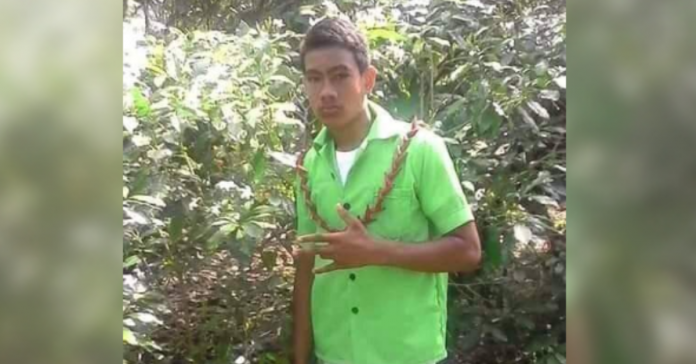 Miracle Miyokoo Iva Aileone is the 4th child of Iva and Katalina Aileone’s 7 children. His family have shared the shock of Miracle’s sudden death with Samoa Global News.

His older sister told Samoa Global News that her brother was a humble boy who never answered back to their parents.

“When our parents scolded him he would never ever say a word.”

According to Miracle’s siblings, their brother was a well known comedian not only in their family but also amongst the youth of their village.

“If there was laughter breaking out amongst a group of youth in the village, then for sure you’d know Miracle was there.”

Miracle’s father Iva Aileone said his son was loved by his mother because he never answered back to a growling (otegiaga).

Iva said that when they went to see his son at the morgue on Sunday it was a horrific scene that he did not expect.

“His head had a gaping wound like it was injured by a sharp object and his face was badly bruised and his tongue was torn.”

Mr Aileone said that the family of the accused had 2 in-laws (faiavā) living there who had come through on push bikes with plastic bags suspected to have contained marijuana. Some youth from their village snatched the plastic bag from these faiavā. Miracle’s father says he thinks the accused suspects Miracle to have been amongst those youth.

“I believe that is why this has happened to my son. But some youth from our village have said that Miracle was not even there when this happened and that he was not involved.”

Miracle had big plans to work and help out with his family. His sister said that the 20 year old was all set to travel to American Samoa next week to take up a job with the Starkist Company, and help out their family financially.

Miracle’s father said that he and his wife will not rest  until they have answers to the motive around his son’s fatal beating.

He said their family is praying that the Ministry of Police will be able to answer their questions.