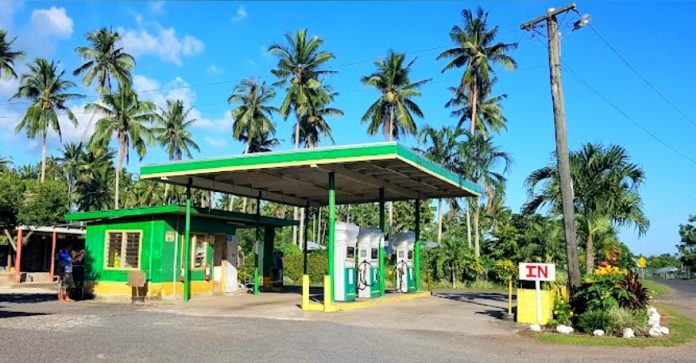 A traditional apology has been performed by the family of a 17-year-old boy charged for deliberate actions that set fire to a petrol station at Saanapu in the south west of Upolu.

The petrol station belonging to the district Member of Parliament, Leaana Ronnie Posini was captured on video in a blaze of fire.  The video footage shows Penerose Peneueta sitting at the back of a white dyna truck while a staff member was pumping petrol into a bottle (fagupa’u) held by another boy in the truck. The defendant is alleged to have playfully used a lighter to cause a blaze of fire that quickly engulfed the pump and its surroundings. Just before the blaze, the youth can be seen in the video footage, reaching across to the where the fagupa’u was being filled.

Penerose Peneueta was released on bail after appearing before Justice Niava Mata Tuatagaloa this morning in the Supreme Court. The Court acknowledged the traditional ifoga already performed by the defendant’s family to the family of the MP.

Justice Niava Mata Tuatagaloa spoke to the young man, outlining the conditions of bail. Mr Peneueta is to stay in his family home at Siumu, stay away from any petrol station, and sign in every Friday at the Poutasi Police station.

“The Court aknowledges that your family have already performed a ifoga and that has also been well received by the owners of the petrol station,” said Justice Tuatagaloa.

“You must stay with your family at Siumu, and do not go anywhere near petrol pumps, or engage in any activity using lighters..”

Justice Tuatagaloa adjourned the case to next week Monday where the defendant is expected to enter a plea.