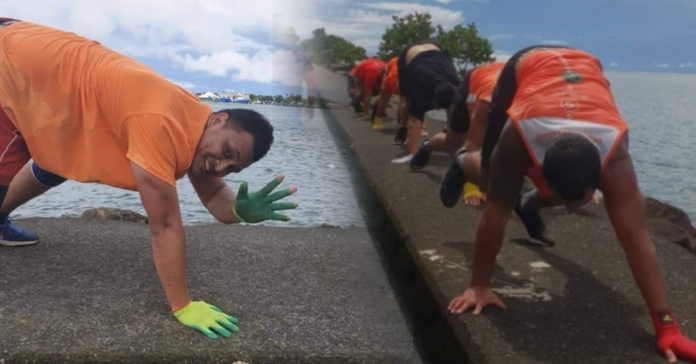 Jonathan Keil is Orion’s cousin and the two had grown up together in Samoa as brothers, their homes next door to each other.

When the news came that his cousin Jonathan, a father of 3 boys was fighting cancer, Orion thought that a fundraiser would help his cousin and his wife with costs of treatment relating to the unexpected diagnosis.

As a Zuu Instructor and Afiliate Orion decided to not only shave his head, but do the ultimate challenge of 2.5 kilometres of bear crawls along Apia’s seawall.

His Keil family members were quick to come on board and support the initiative.

“At the moment its $13,000 we have fundraised. We are not taking any more donations as we would like to send the money to Jonathan as soon as we have collected all pledged money”, said Orion’s wife May Keil.

“Yesterday was about our family coming together to support each other and show our love for Jonathan and his family”, she added.

The scene was a magnificent display of love. Family, friends and supporters either bear crawled, ran, power walked, or even ran with weights to show their support for Orion while a support crew followed closely with encouraging words, offering prayers and carrying water.

“Our hearts are still so full from the love that came together yesterday,” said Orion.

“The amount of support received for the fundraising event was overwhelming.”

After the seawall challenge, many family members and supporters then showed their support by having their heads shaved.