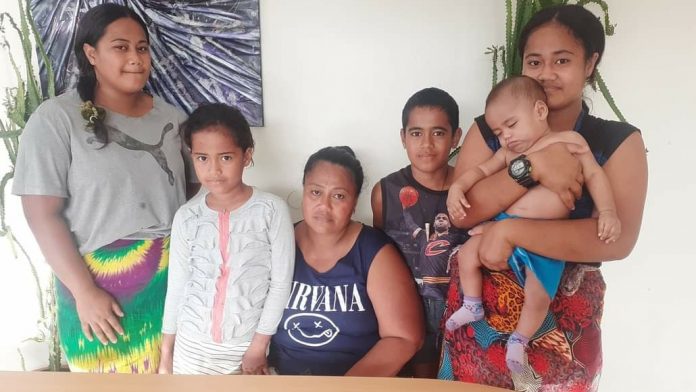 The mother of five from Faleu, Manono has been left with nothing after villagers stoned and later destroyed their home and business property, when they did not move away after a banishment was imposed on them by the Village Council.

Atalelei Fa’apito, her husband and their five children have been forced out of their five bedroom home at Faleu Manono, and now live in a faleoo behind a family member’s property at Tanumapua.

In an interview with Samoa Global News, Atalelei says her four older children have not been able to return to school, because her whole family was left without clothes, even the school uniforms were taken by village looters who helped themselves to their belongings after the attack.

“Nothing was left in our homes and even our shop after the attack. They took everything, like everything we had, we are now left with nothing,” she said in tears.

The Faapito family were banished from Faleu Manono for political reasons according to Atalelei. “It was because our family had not supported the village’s chosen candidate, who ended up not winning the April 9th general elections”.

Atalelei said her elderly father did immediately move out of Faleu, out of respect to the village decision. However, she said it was not possible for herself and her husband to vacate their family home, and leave behind developments they had established such as a shop, a sheep farm (pa mamoe), koko for export and other income-earning initiatives.

Last month, villagers who felt they had disobeyed the banishment order stoned and attempted to torch their home in the middle of the night. Atalelei, her husband and their five children took refuge next door but returned the next day to find their lives completely destroyed. Their personal belongings and shop supplies ransacked and stolen, and their farm destroyed.

Atalelei Fa’apito said she had to lie on top of her 4-month old baby as rocks came through the windows of their home. Her other four children screamed as rocks hurled through their home, the sound of banging as rocks hit the outer-boards of the house and landed on the roof, frightening them.

Today, Atalelei says they continue to live with nothing, altogether in a faleoo at Tanumapua, but what concerns her most, are the signs of post-traumatic stress she sees in her children.

“My oldest daughter has changed and so have my other children,” she said. “She stares most of the time and is scared to go outside of the faleo’o that we are living in now”.

Atalelei said she did take her children to the doctor immediately after the incident.

“I was advised that my children needed to be screened by Dr Tuitama who specialises in such cases”.

Atalelei said she did not know how much that would cost.

“It’s difficult for me because we have nothing,” she said. “It’s like we are now back to square one, from everything we had, to nothing at all.”

Atalelei said it is sad to know that her children are facing the consequences.

Police continue to investigate and have arrested three suspects from the attack on the Faapito family and their property.

“I pray to God for some answers, and for justice for what the taulelea and matai of Faleu have done to our family.  I just thank God for his guidance that none of us died during the incident, but the consequence is that we are left with nothing”.

“I guess our rights to vote for whoever we want has been violated and that’s why it is so unfair what the villagers have done to my family,” she said.

Mrs Fa’apito says whoever is respnsible for not only stoning, torching and also stealing their shop and their belongings should pay for what they did.

“We forgive them but at the end of the day, my family and I are suffering and it’s the first time I’ve experienced such a nightmare,” she added.