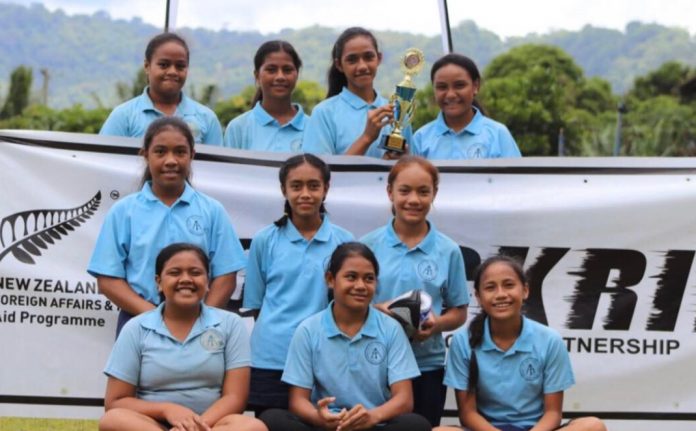 The 13 schools were divided into four Pools and two Divisions – Under 10s and Under 13s. For Under 13’s, Lepea Primary School won the U13 boys while Ah Mu Academy won U13 girls. For the Under 10’s, Lepea took a clean sweep, taking both boys and girls that division.

In the U13 boys final match, Lepea Primary School came out stronger to beat Peace Chapel by only 5 points with a final score of 10-5.  The U13 girls cup final between Ah Mu Academy and Vaigaga Primary School was also a close match of 10-5.

For the cup final for the boys under 10, Lepea beat Robert Louis Stevenson by 5-0, while the cup final of the U10 girls saw Lepea take on Saina/Toamua, also winning by 5-0.

Faleata makes it the third district now completed for the GiR-QuickRip Series of primary schools festival. Similar programmes have already been held for Lepa & Lotofaga as well as the Amoa districts. The programme now moves on to cover Palauli, Anoamaa and Vaimauga districts.

The Get into Rugby / Quick Rip programme is a development initiative of the Samoa Rugby Union supported by the Government of New Zealand. Amongst the coordinators are former Manu Samoa 7’s captain Afa Aiono, and former Manu Samoa hooker, Andrew Williams.