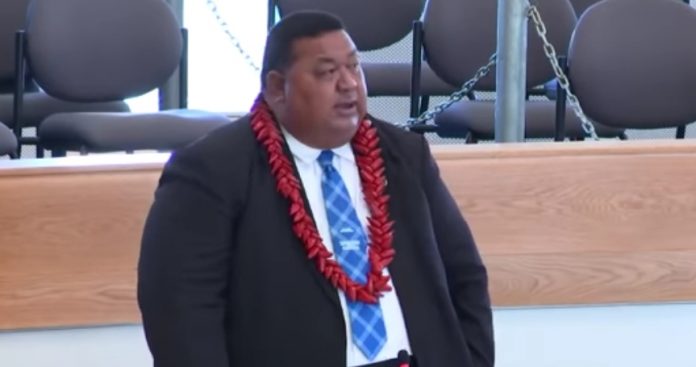 Tui-Atua Tupua Tamasese Efi spoke at a Fa’atuatua i le Atua Samoa ua Tasi political party community engagement rally, held last week in the village of Salani Falealili, as part of the FAST Roadshow. The former Head of State had spoken openly about his concerns with the newly enacted LTC Bills, and gave his support to the FAST party for the upcoming general elections.

The incumbent MP said the act of taking sides in politics threatened the dignity of the chiefly status of the Tama-a-Aiga, and advised Tui-Atua Tupua Tamasese Efi against it.

Also a former Prime Minister and former opposition leader, Tui-Atua Tupua Efi holds one of the four paramount chiefly titles of Samoa, known as the Tama-a-Aiga (‘Sons of the Families’). A state dynasty, Tupua is the titular head of one of Samoa’s royal families – Sā Tupua. Furthermore, Tui Atua is the paramount chief of the influential Safenunu’ivao family in the Falealili district.

Fuimaono had come to the end of his final address before the dissolution of Parliament, when he touched on the issue of Tui-Atua Tupua’s involvement in political rallies.

In his address Fuimaono drew a historical picture of Falealili, where elected Members of Parliament had been members of the government, and also members of the opposition, from time to time. He said this was true democracy, to allow the people of Falealili to vote freely for what they believed in.

“It is not new for Falealili East to have differing views..” said Fuimaono, “but we have always been respectful in the way that we maintain our relationships…”

FAST party leader La’aulialemalietoa Leuatea Schmidt interjected, advising Fuimaono to not speak to such matters in Parliament, where the Tama-a-Aiga was unable to respond, adding that the paramount chief had attended by request of the village of Salani.

The Prime Minister stood to say he too was connected with the Safenunuivao family, and agreed with Fuimaono’s views and advice. He added that Fuimaono was giving advice and not criticizing. “O le fautua ae le o se faitio..”

Fuimaono ended his Parliamentary address by saying he was merely giving advice to the Tama-a-Aiga and those who had publicly aired their political views; to not compromise the dignity of the paramount chiefly status, adding that the constituency of Falealili East was used to voting for what they belived in. He said the foundation of Falealili when it comes to selecting a Member of Parliament, is to vote by their own free-will (filifiliga sa’oloto).