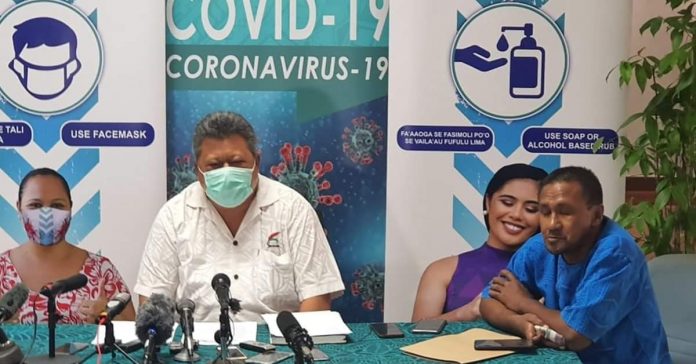 “I can say with 80% or even 100% confidence that the deceased did not have coronavirus”, said Leausa.

“We don’t want to create unneccesary panic to our people”, he added.

Leausa called a special press conference to address what the Director General called “irresponsible fake news by individuals who wanted to lead breaking news” in Samoa.

Leausa reassured the media that the deceased man had been  tested before leaving the quarantined facility in Poutasi.

“There were 12 of them in a 2 storey building and I can assure you that all tested negative before being released.”

The man was released on the 31st of July after the mandatory quarantine period of 14 days for all repartriates.

Leausa said authorities will be looking at bringing charges against those responsible for publicising fake news, in relation to the nation’s health.

“We have even heard rumours that the government is hiding COVID-19 patients..;

“A taxi driver has been identified as one of the sources of such fake news..”

Leausa said a coroners report has been requested for the deceased, but this was just an added precautionary measure.

How long it will take to determine the cause of death is uncertain because Samoa relies on pathologists coming from New Zealand.

Asked if the Ministry had developed a system of contact tracing in the event coronavirus would enter Samoa, the Director General said the treatment of repartriated citizens was part of that process.

“That makes it easier for us to trace them in the event of a case”, he said.

The Director Gental of Health says there currently around 300 repartriated citizens in quarantined facilities around Upolu.

“The last flight from New Zealand had 278 and a few from Fiji are still in isolation.”

The Health Chief says the fate of another flight from NZ scheduled for the 28th of August, as well as weekly cargo flights are now in question with New Zealand’s recent cases of COVID-19.

“Cabinet will be meeting this week to determine the next cause of action for Samoa”.