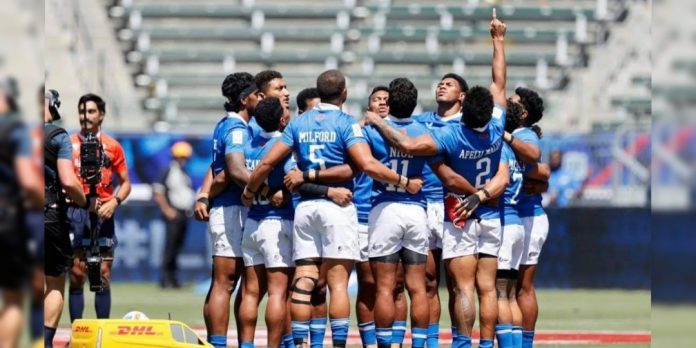 12 December 2022, HSBC 7s Leg 3, Cape Town South Africa. Manu Samoa 7’s have made it to their first grand final of an HSBC World Series leg since 2019 after defeating host nation South Africa by 10-7.

A penalty goal off the boot of 20-year-old Faafoi Falaniko broke the 7-7 tie in extra time.

Samoa came into the match as underdogs as the home crowd roared their Blitzboks onto the field, while boo’s filled the stadium to welcome Brian Lima’s brave team of local youngsters.

Samoa fumbled the first kick-off of the match which put them on defense right from the start.

Samoa’s defense was on point throughout the match – much like a brick wall that stood steady as South Africa struggled to find any progress on attack.

Samoa turned defence into attack when the ever-reliable Uaina Sione earned Samoa a penalty with aggressive tactics in the tackle ball area.

A quick tap put Samoa on the front foot and saw them inches away from the try line.

An easy catch and pass down the attack line put the ball into the hands of Co-Captain Vaovasa Afa Su’a, who fooled the Blitzboks defense with a suave sidestep to go over for Manu’s first try.

The match would stay at 7-0 for quite some time with South Africa having the bulk of ball possession until halftime.

In the second half Samoa defended and defended, often being called off-side until eventually the Blitzboks crossed under the post to level the match.

At 7-7, the match would go into extra time and the two sides got to regroup over a short break.

Samoa’s Faafoi Falaniko was in charge of the first kick-off at the start of extra time. Falaniko sent the kick into the heavens and with the pressure of their home crowd behind them, South Africa dropped the ball cold.

The South African player had knocked the ball on while he was in an offside position, and young Falaniko is seen calling and gesturing to point out the infringement to the referee.

Samoa was awarded the penalty 30 meters out from infront of the post, and suddenly the Co-Captains had a massive decision to make.

Vaafauese Apelu Maliko is first seen signaling a scrum while Falaniko points to the sticks. Vaovasa Afa Su’a asks the youngster if he’s good to kick the penalty.

Apelu-Maliko backs the call and gestures Samoa’s decision to the referee. The youngest player on the paddock would take the kick.

Stepping up to leadership, 20-year-old Falaniko sets himself up for the dropkick which he sent straight down the middle of the sticks to secure his country’s place in the grand final.

In the post-match interview with New Zealand-Samoan commentator Ken Laban, Muliagatele Brian Lima gave thanks to God and said the team has had time to reflect and refocus since last weekend’s Dubai 7s.

“All this week we’ve been focusing on ourselves, learning from what we’ve been doing wrong to try and eliminate mistakes,” said the Head Coach.

Samoa will face off against Pacific rivals New Zealand at 6:56am Monday morning for the Cup Championship.