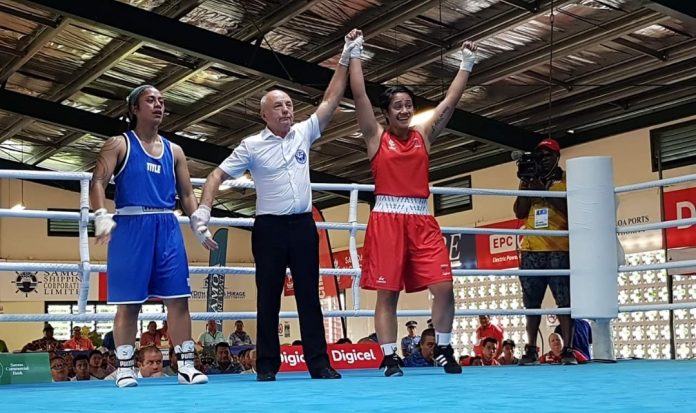 18 July 2019, Pacific Games Salelologa, Savaii Samoa. Fa’aasu Loia is through to the Gold Medal finals for women’s boxing after a performance that rocked the Don Bosco Hall in Salelologa this afternoon.

Coached by heavyweight boxer David Tua, Fa’aasu won the hearts of spectators with the ease of which she floated around ring, dominating the first round by landing clear punches on her opponent.

Right from the first bell Fa’aasu was seen putting in combinations that left her Tongan sister with a bleeding right eye mid-way through the second round.

Loud cheers were heard from a packed out Don Bosco hall at Salelologa each time Fa’aasu landed a left hook.

By the end of the second round, the referee was forced to stop the fight, sending Fa’aasu through to the finals with a win by RSC.

Not something they see everyday, Savaii spectators were heard talking about the “girl who could box” after the fight.

Fa’aasu is up against Tahiti in the finals tomorrow.

Fa’aasu’s Tongan opponent whose mother is actually from Savaii will face New Caledonia for the bronze medal.

There are now 7 Samoan Boxers through to the finals tomorrow including Fa’aasu.

Team Samoa Boxing has 7 finalists out of a team of 9 boxers all going for gold, with Alai Faauila boxing tomorrow for bronze.