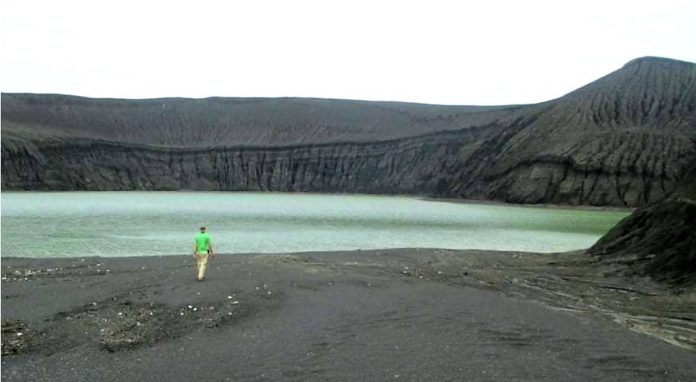 The undersea volcano that erupted near Tonga sending a massive wave surge through the Pacific Ocean could erupt again within days, but Saturday’s blast was likely the biggest we will experience, an expert says.

Shane Cronin, Professor of Earth Sciences at the University of Auckland, spent six nights camped out on the Hunga Tonga-Hunga Ha’apai volcano after its last series of eruptions in 2015.  As part of a team of experts, Dr Cronin ran tests across the area to study the volcanic behaviour taking place below the ocean surface and determine the likelihood of future eruptions.  The team found evidence of regular “big ones” occurring roughly every 1,000 years.

Experts say that the last one took place around the year 1100, it seemed likely the area was headed for another large-scale eruptive sequence.

This week, a sequence that started with smaller eruptions shooting smoke and ash into the air culminated in a massive surge that was captured in satellite footage on Saturday.

“When I looked at the past deposits from this volcano … there was evidence for many, many eruptions during each episode,” said Dr Cronin.

While this latest eruption could very well be “the big one”, Dr Cronin said it was possible that “more and bigger” eruptions could follow.

Over the weekend, Tsunami warnings were issued across much of the Pacific, including New Zealand, Canada and the US.

Little information about the extent of damage or injuries was received from Tonga — home to about 105,000 people — as internet access was disrupted after the eruption.

Tonga’s internet flows through an undersea cable from Suva in Fiji and this is suspected to have been damaged.

Dr Cronin said the cable itself could have been damaged or the outage could be due by power shortages across the island caused by heavy ash fall that also blackened the sky.

Video posted to social media showed large waves washing ashore in coastal areas across the Pacific, swirling around homes, a church and other buildings.

Satellite images showed a huge eruption, with a plume of ash, steam and gas rising like a mushroom above the blue Pacific waters.

Sleeping on an active volcano

The 2015 eruptions created a new cone — largely consisting of lava and ash — that joined the islands into one mass.

This volcanic platform is where Dr Cronin and the team camped.

“We went around measuring the Bathymetry, or the ocean depth around the islands, and that’s when we found the very large caldera sitting on the top of the volcano,” Dr Cronin said

Their tests revealed that hiding below the waves was a massive volcano, around 1,800 metres high and 20 kilometres wide.

Following Saturday’s explosion, it was difficult to monitor the site due to thick clouds of smoke and ash, but new satellite data revealed the immense size of the explosion.

“The generation of this very large eruption, and also the tsunami indicates that the top part of that volcano has collapsed down,” he said.

“So that probably now means that, well, first of all, we’ve got less gas-rich magma remaining — the large part of it is erupted out.”

It also means the volcano is deeper than it used to be.

“As it gets deeper, it’s harder for these eruptions to break through the ocean.”

But the Hunga Tonga-Hunga Ha’apai is not the only volcano, nor the biggest, to threaten Tonga and the Pacific.

“The Tongan part of the Pacific Ring of Fire is one we don’t see much of because a lot of the volcanoes are submarine,” he said.

“But they are huge and basically every 100 kilometres along that chain is another massive volcano.”