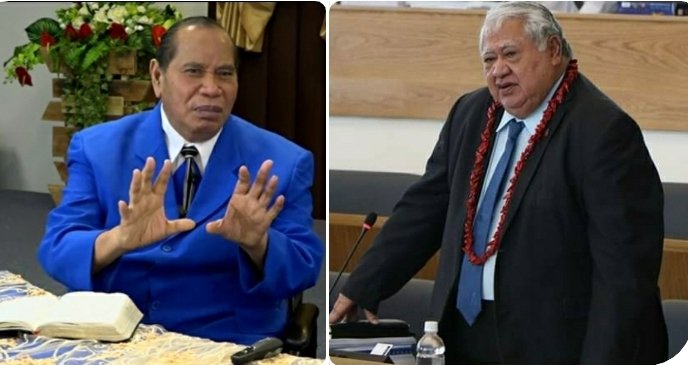 Pastor Willie Papu has delivered sermons on the SISDAC facebook page with his version and interpretation of early  Church history with references and implications on the Roman Catholic church.

The sermon and subsequent sermons that can still be viewed on the SISDAC Worldwide facebook page, has ignited strong opinions, now widely debated on social media platforms. When asked for comment, however, several people who have aired their views, tell Samoa Global News that they hadn’t actually seen the program but have formed their views and opinions from what others have said.

The SISDAC leader mentions the Samoa Prime Minister, with accusations that Tuilaepa is enflaming violence and unrest amongst churches in Samoa, as a repeat of early Church history.

Pastor Willie Papu alleges in his sermon that Tuilaepa’s appointment as the Government Leader was influenced by a foreign Government.

In response Prime Minister Tuilaepa Sailele Malielegaoi confirmed in Parliament that the Office of the Attorney General (OAG) has been tasked to lead a libel and criminal probe into the church leader’s sermons.

“It was the Prime Minister’s response to calm down audible concerns heard in the House condemning Pastor Papu’s sermon described by a handful of lawmakers as ‘slanderous, insulting and will incite chaos and division amongst churches in Samoa’”.

The SISDAC leader goes on to chastise the Prime Minister, with accusations that Tuilaepa is enflaming violence and unrest amongst churches in Samoa. Pastor Willie Papu alleges in his sermon that Tuilaepa’ appointment as the Government Leader was influenced by a Foreign Government.

In denouncing the claims, the Prime Minister not only labelled the SISDAC pastor’s opinions as “antichrist” but has reassured Parliament that Government will address the unorthodox ideology to the full extent of the law.

“This is character assassination. It’s worse than murder because the public shame will be inherited by the victim and his or her children forever,” the Prime Minister said in Parliament.

“Small knowledge is extremely dangerous,” he added. “This Church was born just yesterday,” he said and elaborated a stern advice to the Pastor to follow the Scripture’s teaching to preach peace and respect and not hate messages which may backfire on the SISDAC.

“These slanderous opinions are unacceptable not only in Samoa but for all Christian faithfuls and Communities worldwide.”

“The SISDAC Pastor like many individuals are obsessed with their hallucinations that they are protected under the freedom of speech and freedom of expression rights which gives them free reign to publicly shame and discriminate any individual, organisation, church or government without facing any legal consequences.

“I can assure you Mr Speaker and Members of Parliament that there is no absolute right to freedom of expression,” said the Prime Minster. “This was proven in the landmark case between the late Prime Minister Tofilau Eti Alesana as plaintiff against the Samoa Observer newspaper.
“The unprecedented court ruling in favour of the plaintiff had exquisitely reaffirmed that that there are restrictions which includes freedom of expression taking into account our unique customs and aganu’u. It’s all in our law books as well as our Constitution.”

According to the Prime Minister, TV1 Sanoa is just as responsible and accountable as the SISDAC Pastor and “they will be made to answer”.

“The program should have been censored by TV1,” said Tuilaepa. “It should never have been aired and along with many of the viewers who have shared their discontent personally, I am also very disappointed with the lack of professionalism.”