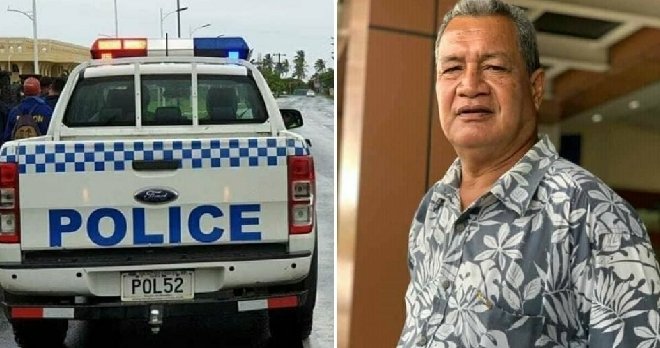 A former police officer arrested and charged with criminal libel for making defamatory remarks about Samoa’s former Deputy Speaker of Parliament on national television, has been detained in custody to await his first court appearance.

Police Commissioner Fuiavailiili Egon Keil said the ex-cop resisted arrest and took off in his vehicle when police approached him to make the arrest.

“A road block was set up that eventually stopped him.. he could have hurt someone if he continued…”, said Su’a.

A complaint of defamation was lodged against Paepaetele Earnest Junior Betham after he appeared as a guest on EFKS TV and made allegations against Samoa’s former Deputy Speaker of Parliament, Nafoitoa Mataia Valu Talaimanu Keti.

The allegations made by Paepaetele Junior were based on an alleged incident that took place in 2007 when former Speaker Nafoitoa was the Officer in Charge at Faleolo Police Outpost.

“I’m sitting with something important I want to share..”

He said there was no investigation, and according to Paepaetele, the alleged victim is still serving as a police officer today.

On his Facebook page, Nafoitoa who is contesting the seat of Gagaemauga No.2 in the upcoming general elections, took to social media to immediately deny the allegations, which he said was politically motivated and purposely timed close to elections.

In 2013 Samoa withdrew libel from its Crimes Act as a media reform initiative, however it was reintroduced in 2017, allowing police to bring charges against an individual for defamation made public.

Crimes Act s117A. False statement causing harm to a person’s reputation – (1) A person commits an offence who publishes by
any means information:
(a) about another person;
(b) that is false;
Crimes Act 2013 51
(c) with the intention to cause harm to that person’s
reputation.
(2) It is a defence under this section if the information
published is true.
(3) A person who commits a crime under this section is liable
on conviction to a fine not exceeding 175 penalty units or
imprisonment for a term not exceeding 3 months.